Test Your Classic Film Knowledge! (Not!)

In the 1930s, lots of tobacco companies tucked little film-star photo cards into their packs of cigarettes. (By the way, if you’re looking for cheap, fabulous movie memorabilia, these cards, unlike the product they came with, are just what the doctor ordered: Just go to any auction site, type in your favorite star’s name and the word “card,” and see what pops up.)

In 1936, England’s Ardath Tobacco Company took things a step further with a series of 50 cards called “Who Is This?” asking fans to name the stars featured on the front.

I know—nobody told you there was gonna be a quiz.

But here’s the thing: the card showed you almost the whole face. So unless you were some sort of savant who identified people solely on the basis of their foreheads and chins, this was pretty easy sledding. (Don’t you wish your tests in school had been like this? “Name the 1815 battle where the Duke of Wellington beat Napoleon. It rhymes with ‘aterloo.'”)

For those who were still somehow stumped, the cards had little teasers under the “mystery” faces. Ann Harding has a “sweetly serious mein,” Garbo’s “cold serenity masks a depth of feeling,” Katharine Hepburn is “a red-haired tempestuous genius,” and Clark Gable has “firm lips and humorous eyes,” not to be confused with Herbert Marshall’s “sympathetic eyes and lips.”And amid the Garbos and Gables, they tucked in George Arliss, who “has made history live.” But somebody really phoned it in for the fabulous Kay Francis, calling her merely a “famous screen star.” I mean, come on!  How about “divine deco diva” or “lush, limpid-eyed lover”?

Here’s a sampling of the cards; for the first one, I’ve shown the answer on the back (she “won the American 1934 Gold Medal” for It Happened One Night!), but for the rest, well, try to struggle through somehow: 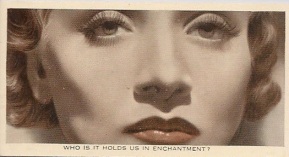 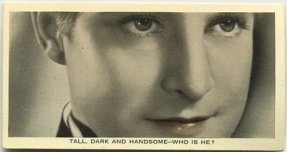 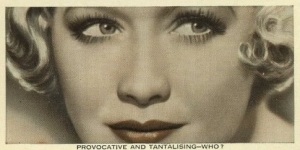 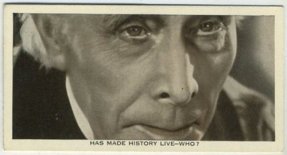