STREAMING SATURDAY: I’LL BE SEEING YOU Finds Christmas in None of the Old Familiar Places

Welcome to another edition of Streaming Saturdays, where we embed free, fabulous movies for you to watch right here!

When people talk about “beautifully told” stories, they usually mean ones that are a bit too beautiful to be real. This one is beautiful and real. William Dieterle’s I’ll Be Seeing You is the story of a fragile love affair between an emotionally damaged soldier who’s just been released from a mental hospital and a woman on furlough from jail for the holidays. What can I say, it’s my idea of the perfect Christmas movie.

Mary Marshall (Ginger Rogers) is on a painfully brief respite from a six-year prison term when she meets army sergeant Zachary Morgan (Joseph Cotten) on a cross-country train bustling with holiday travelers. When we first see them, we don’t know anything more about them than they do about each other. They’re a little shy, a little hesitant, but a well of instinctive sympathy seems to bubble up between them.

After Mary settles in awkwardly with her well-meaning aunt and uncle (Spring Byington and Tom Tully), it’s this stranger who makes her feel most at home. When Zachary calls the house, you can feel her anxiety start to soften into something resembling relief. And from there, they push past their fears and very real obstacles to find their way closer to each other.

It would be easy to milk this premise for all the pathos you could wring out of it, but Cotten and Rogers never strike a maudlin note. Or a false one. If anyone still needed to be convinced about what a terrific actress Ginger was, this is the film I’d show them. She was great in her Oscar-winning turn in Kitty Foyle, but her character here is much more complicated—a bit brittle, fearful and disillusioned, but still hopeful, and, by movie’s end, very much in love. And of course no one needs convincing about Cotten, though I don’t think he’s ever gotten his due as a romantic leading man.

Shirley Temple has one of her first kind-of-adult roles here, and early on, she’s a bit of a bitch, which must have been a refreshing change for her. But in some ways, she was still our Shirley: she confessed to having a huge crush on Cotten while filming this movie and Since You Went Away earlier in 1944. 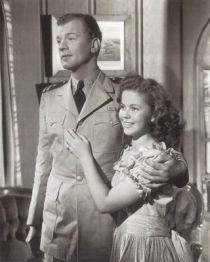 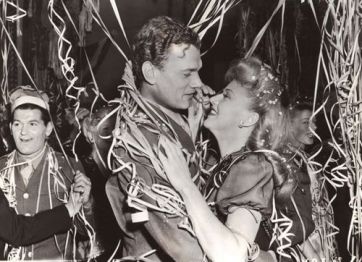 Even after the war, few movies, notably The Best Years of Our Lives, tackled the psychic wounds that returning soldiers struggled with after seeing more horror in a few short months or years than most of us could imagine in a lifetime. Amazingly, though, I’ll Be Seeing You faced that issue head-on while the war was still raging on two continents.

I love this movie. I hope you do too.

STREAMING SATURDAYS is a regular feature on Sister Celluloid, bringing you free films! You can catch up on movies you may have missed by clicking here! And why not bookmark the page to make sure you never miss another?