The Fifth Annual TCM Classic Film Festival opened with a glorious restoration of Rodgers & Hammerstein’s Oklahoma!—guaranteed to make you forget every muddy, washed out version you’ve ever seen on Sunday afternoon television. It truly looked and sounded like a whole new movie.

The print was lovingly struck from the original 65mm Todd-AO elements and screened at 30 frames per second instead of the usual 24, just as it was when the film premiered in 1955. The original 6-track soundtrack was also restored and remastered. I know little about the technical aspects of all this, but when the curtains opened at Grauman’s, and Gordon MacRae’s steed galloped through those golden fields against that azure-blue sky… Oh, what a beautiful morning!

And oh, what a Hollywood story Shirley Jones, who introduced the film with TCM host Robert Osborne, shared with the audience. Jones was named after Shirley Temple—and her road to stardom sounds like the storyline from one of the moppet’s movies. She started singing when she was a toddler, eventually training formally. “It was a gift,” she said matter-of-factly. “I thought everybody could sing like that!” Her voice teacher, who knew otherwise, convinced her to pack up her life in Pennsylvania and audition in New York City. 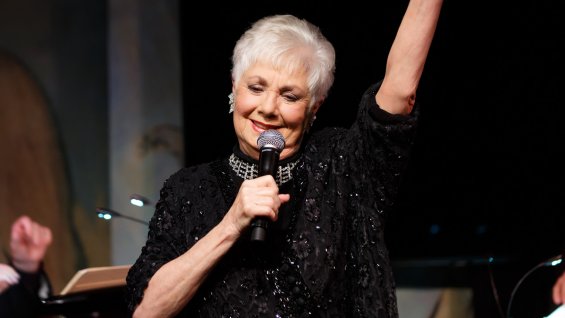 “I was eighteen, and on my way to college to become a veterinarian!” she recalled, shaking her head. But she agreed to the audition, which turned out to be with John Fearnley, a casting agent for Richard Rodgers and Oscar Hammerstein—whom Jones had never heard of. “He in turn called Mr. Rodgers in to hear me personally and he called Oscar Hammerstein to hear me personally, and that’s how it all started,” she said, letting out a startled laugh, almost as if she still can’t believe it more than 60 years later.

Eventually, after smaller roles in the pair’s Broadway productions of South Pacific and Me and Juliet, Jones beat out every Hollywood veteran who had her eye on the role of Laurey in the movie version of Oklahoma! And still, her dream was just beginning. “I used to wake up listening Gordon MacRae’s radio show every morning,” she sighed. “For me to have the opportunity to sing with him… that was very, very exciting for me.” 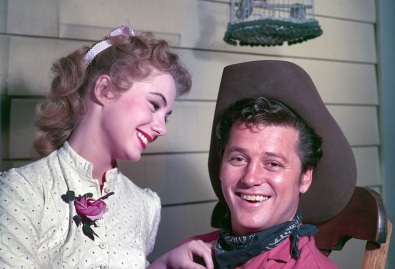 The following year, she starred with MacRae in Carousel—though he wasn’t the producers’ first choice. Frank Sinatra was originally signed to play Billy Bigelow, and Jones remembered how excited he was about it. “We made all of the pre-recordings, the photographs, everything,” she said.  “He had told me, ‘Shirley, this is a dream come true for me—this is the best musical part for a man ever.’” And Sinatra seemed a great fit for the role of the dangerous, romantic rogue.

As Jones remembered, the cast, crew and director Henry King were gathered on the pier in Boothbay Harbor, Maine, ready to film the first scene. Because it was being shot in both 35mm and 55mm CinemaScope, two camera rigs were set up as well. All that was missing was Sinatra. Finally, the latecomer pulled up in his limo—and immediately confronted King about the dual cameras. The director told him about the two separate film processes, and Sinatra balked. “Does that mean I’ll have to shoot a scene twice?” he asked. “Perhaps sometimes,” King replied. His reaction stunned everyone. “I signed up to do one movie—not two,” and with that, Sinatra jumped back into his limo and headed for the airport, never to return.

“Henry Ephron, the producer, was frantic, almost in tears,” remembered Jones. He turned to her and asked, “Where’s Gordon MacRae?” She said he was performing a nightclub act in Lake Tahoe with his wife, Sheila.

“I said, ‘Gordon, how would you like to play Billy Bigelow in Carousel?’” And he said, ‘Give me three days. I need to lose 10 pounds,’” she laughed.

Jones said she always wondered if Sinatra was really so offended by the prospect of potential retakes, or if there was a more pressing reason he stormed off so suddenly. But he always refused to discuss it with her. Then years later, at a press conference, a few veteran reporters cornered her and told her what they called “the real story.” They said Ava Gardner, who was then married to Sinatra, was shooting Mogambo in Africa at the time. “And she called him and said, ‘Unless you get your fanny down here, I’m going to have an affair with [Clark] Gable,’” said Jones. “And apparently that’s why he left the movie.”

Oh my God, that’s incredible! The gloriously potty-mouthed Gardner used terms like “fanny” and “have an affair”? Well, no. And as it turns out, the rest of the story those reporters told Jones couldn’t have been true either. Carousel began shooting in 1955 and Mogambo wrapped in 1953. As the cast and crew—kept awake by epic bouts of fighting and making up—could drowsily attest, Sinatra was with Gardner in Africa right from the start of filming, leaving only briefly to audition to From Here to Eternity.

So the rumor about why Sinatra left Carousel could be disproved with a five-second Google search, but that didn’t stop a lot of “journalists”—including those at Variety, Vanity Fair and the New York Post—from treating the story as the gospel truth when they wrote about Jones’ appearance at the Festival. Personally I wish she had spent less time on that and more time explaining how MacRae lost 10 pounds in three days.

Ironically, shortly after Sinatra bolted, the producers discovered a way to film scenes in 55mm and transfer them to 35mm, dramatically cutting down the need for reshooting. Oh and if you’re wondering how Sinatra and Jones might have gotten on together if he had stuck around, I found this clip of the two singing “If I Loved You” on The Frank Sinatra Show in 1958 on an obscure website (it’s well worth sitting through the loud 10-second commercial, in Russian, at the beginning):