The official theme of this year’s TCM Classic Film Festival was Family—which, for some, meant coming home: actors and films that had been dissed and dismissed finally felt the warmth of the spotlight and the embrace of appreciative crowds.

Director William Friedkin was on hand to introduce his 1977 film Sorcerer, which, in its original release, was swamped by the Star Wars juggernaut and saddled with a title that implied it might be a supernatural follow-up to The Exorcist, which it resembled not in the least. “It opened right here at Grauman’s,” Friedkin told the packed house, “and closed a week later.” But all of that was forgotten as he invited some of the people who worked on the film, including screenwriter Walon Green (The Wild Bunch), up onto the stage to share the moment with him. The evening suddenly took on the feel of an awards ceremony, with the coveted prize being long-overdue recognition for a brilliant film—and nary a Wookie in sight.

Having seen The Wages of Fear, on which Sorcerer was based, I knew it would be heavy going, but I was so excited to see a “new” Friedkin film, especially one starring Roy Scheider. Still, watching it play out on the four-story-high screen was truly harrowing. I’m pretty sure I left my fingernail marks in the armrests—and maybe in the arm of the poor guy sitting next to me. In typical Friedkin fashion, he had us worried sick about deeply flawed and even criminal characters, including a terrorist, an embezzler and an armed robber. Warner Home Video has just released a restored print; I wouldn’t recommend it to the faint of heart, but for everyone else, arm yourself with a fistful of Valium and hang on for an unforgettable ride. 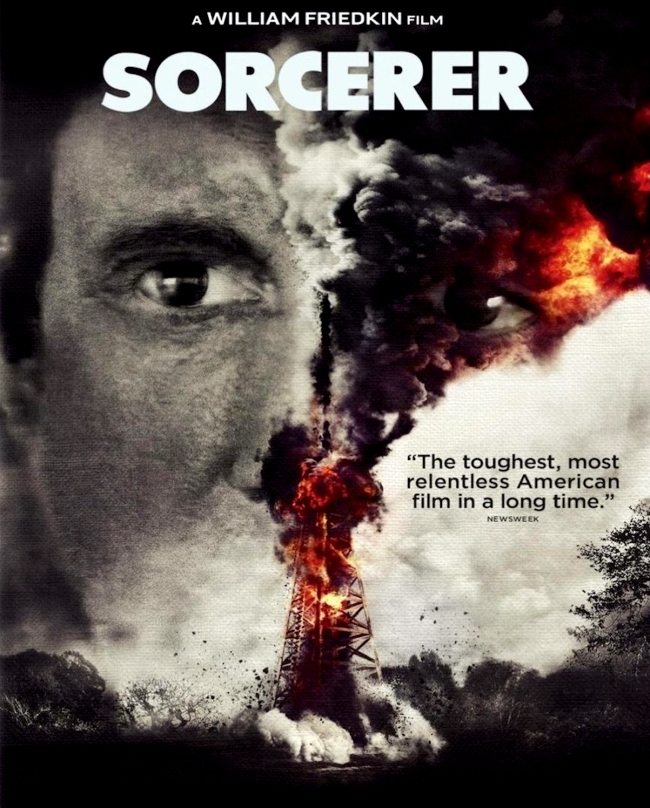 Earlier in the Festival, Friedkin had spent a fabulous hour at Club TCM with Eddie Muller, President and Founder of the Film Noir Foundation (and now a TCM contributor—hooray!).  And when you pair an interviewer like Muller with a storyteller like Friedkin, an hour blows by in about fifteen seconds.

Admitting he still feels a bit guilty, Friedkin recalled how the legendary chase scenes in The French Connection put some of the cast and crew and even a few bystanders in mortal jeopardy. “Back then there were no computer special effects,” he said. “We actually had to do all that stuff. People could easily have been hurt or killed.”

“The same with The Exorcist,” he added, as if to lighten the mood. “That scene with Regan’s head spinning around? We went through, like, fifteen girls for that! We had another ten standing by but fortunately we didn’t have to use them.”

The one girl they really did use was extraordinary. “We looked at maybe hundreds of girls,” recalled Friedkin. “But we couldn’t find anyone who was as young as Regan is supposed to be who could handle the material, which was very intense.” Then in walked 12-year-old Linda Blair, with her mother. “I asked her if she knew what Regan does in the story,” he said, “and she told me she yells at her mother, curses at a priest and masturbates with a crucifix. I asked her if she knew what that meant and she said, ‘It’s like jerking off, isn’t it?’ And her mother is standing there nodding and smiling…”

Muller pointed out that Blair was one of several actors, including Roy Scheider, Gene Hackman, Ellen Burstyn and Jason Miller, that Friedkin directed in breakthrough performances. “To me, maybe seventy percent of the success of the film is due to the casting—at least that,” he responded. “The cast is the most important detail after the script. And the director is somewhere down the line there as an interpreter.”

Friedkin worked especially closely with Blair. “I would find out from her what it was that made her happy or unhappy or scared… and I would draw on those things to get a performance out of her,” he explained. “The thing that made her the saddest at that point in her life was losing her grandfather… and I would just suggest that to her before she did a scene, and she would go out and produce the proper emotion. Or something that made her happy, like a chocolate milkshake. I do that with all the actors I work with… it’s called sense memory. With Gene Hackman it sure as hell wasn’t a chocolate milkshake.”

Jason Miller, the Pulitzer Prize-winning playwright of That Championship Season, sought out Friedkin and pressed him for a chance to play Father Damien Karras in The Exorcist. Miller, barely a journeyman actor at that point, was raised in a family steeped in Catholicism and had once considered the priesthood, but was now plagued by doubts. He insisted to Friedkin, “I am that man.” The director told him they’d already signed another actor for the role, but eventually gave in and tested the relentless Miller, who was right: He was Father Karras. “We felt bad about it, but we had to let the other actor go and pay off his contract,” Friedkin recalled.

So naturally the film-crazed audience demanded to know, who was that other actor? “Oh come on, the guy is a still alive and still acting!” Friedkin protested. “And at the time he was already a successful stage actor.” But the crowd was relentless. “Okay I’ll give you three guesses,” he said, “And if you get it right I’ll tell you.” Just then someone called out, “Stacy Keach?” And the director nodded sheepishly, probably wishing he hadn’t promised to fess up if someone nailed it. (Evidently Keach didn’t hold a grudge; he went on to co-star in the film version of That Championship Season, directed by Miller, and acted alongside him in Exorcist author William Peter Blatty’s The Ninth Configuration.)

To close out the hour, Muller asked Friedkin how he feels about his legacy. “When I hear that word, I think about films like Citizen Kane and Breathless, the ones that influenced me,” said the director. “I really can’t think of any film that, say, The French Connection has influenced.”

Apparently the poor man hasn’t seen a cop movie since 1971.