On the surface, Katharine Hepburn seems to have little in common with the working-class heroine of Alice Adams, a fumbling, insecure Midwestern girl longing to rise above her roots and rejected at almost every turn. But at the time she took the role, Hepburn could empathize with Alice much more deeply than she may have wished.

After winning an Oscar for 1933’s Morning Glory, Hepburn was trapped in a series of dismal flops that threatened to derail her career. In Spitfire, she was comically miscast as Trigger Hicks, a faith-healing hillbilly. (If you’ve ever wondered how a Bryn Mawr girl says, “I’d better go rustle up some vittles,” this is your chance.) In Break of Hearts, she and Charles Boyer generated about as much electricity as a fuzzy slipper on a shag carpet. And in The Little Minister, she played a noblewoman disguised as a gypsy in mid-19th-century Scotland. (No really.) Hepburn initially rejected that last one—and who can blame her—but was talked into it by her agent and then-lover, Leland Hayward. They broke up soon after.

When Hepburn briefly fled Hollywood for the theater—where she had once felt so at home—the results were even worse. Her stint on Broadway, starring in The Lake, inspired Dorothy Parker’s famous quip, “She runs the gamut of emotions from A to B.” And that was one of the kinder comments. She returned to California with little of the self-assurance she had when she first stepped off the train just a few years earlier.

By the time Alice Adams came calling in the spring of 1935, Hepburn was reeling from the first bout of failure and rejection she’d ever known, and craving acceptance as much as the film’s heroine was. She also longed for the safety and security of her friend George Cukor at the helm, but he was directing David Copperfield and suggested either William Wyler or George Stevens.

Wyler was already a name, but Stevens, while a respected cinematographer, had directed only a handful of feature films. So he set about charming the actress, who openly preferred his competitor. “Now what George said to me I don’t know, but I’m sure it was something like, ‘I think you’re the most fascinating, thrilling person in the world and I want to work with you,’” Hepburn laughed in an interview years later. She was growing fond of Stevens, but still had her eye on the prestigious Wyler.

Exasperated and anxious to get started, RKO producer Pandro S. Berman finally suggested they flip a coin to see which man would do the directing honors. “It came up Wyler,” he recalled. “And I looked at her and she looked a little bit disappointed. And I said, ‘How about again?’ and she said ‘Okay!’” The second flip sealed it for Stevens, whom Hepburn often credited with warming up her somewhat chilly persona by encouraging her to reveal a more vulnerable side she’d always been reluctant to expose. (They’d team up twice more, for Quality Street and Woman of the Year.) 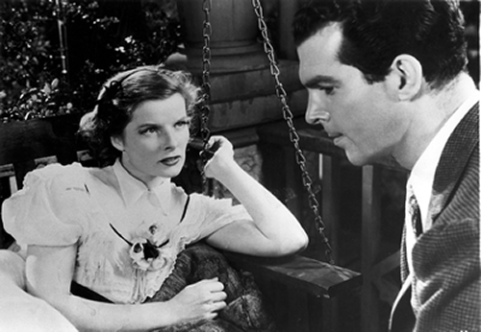 Based on Booth Tarkington’s 1922 novel, Alice Adams centers on a factory worker’s daughter and her desperate attempts to rise through the ranks of small-town society. Hepburn’s nervous mannerisms suit Alice like a second skin, as she flutters frantically through the local country-club ball in her shopworn gown, clutching a poesy of purloined violets picked from a nearby garden. There she meets the well-heeled Arthur Russell (Fred MacMurray), who is charmed by her gaiety even as he glimpses the tender, fearful girl beneath the facade. MacMurray is not given an awful lot to do, and he does it beautifully. Like all of Hepburn’s best leading men, he stays solidly rooted to the ground as she flies and frets around him. (He’s also a seriously underappreciated hottie.)

When Alice finally agrees to let Arthur meet her family, the results are beyond disastrous. On a beastly-hot night, Alice and her parents (Ann Shoemaker and Fred Stone) are totted up in formal evening wear, while Arthur arrives in a simple jacket and tie. When they try to tuck into a crushingly heavy meal more suitable for Thanksgiving than mid-summer, Alice attempts to deflect the blame for the unfolding nightmare onto Malena (Hattie McDaniel), the maid they’ve hired for the evening. “Perhaps we should change le domestique, n’est-ce pas?” she coos nervously. “Excruciating” is an overused word, but here it may be an understatement. It’s actually physically difficult to watch this scene without balling up into knots inside; only Stevens’ carefully orchestrated touches of comic relief—including McDaniel’s aggressively droopy lace cap, Stone’s popping shirt buttons and a runaway Brussels sprout—make it at all bearable.

As they all settle awkwardly into their after-dinner cordials, Alice’s brother Walter (Frank Albertson) returns home with news of his latest and worst embarrassment: he’s been caught embezzling money from the plant where both he and his father work, and he may be arrested. And suddenly what had merely been a dreadful dinner party morphs into a loud and messy family meltdown.

Aware of just how awful the evening has been, Alice ushers Arthur to the front porch to bid him goodnight, all but certain it’s goodbye. Still clinging to her composure but clearly devastated, she tells him she knows he won’t come calling again. But Arthur assures her, somewhat weakly, that he’ll be back. As he disappears down the street, she reluctantly retreats to the tawdry, tumultuous domestic drama still playing out upstairs. Finally, heartbroken and overwhelmed, she breaks away and turns her face to the window, where her tears meld with the rain outside. (And those are real tears:  In a rare moment of disharmony with one of her favorite directors, Hepburn wanted to throw herself onto the bed instead. She and Stevens argued bitterly about it until Hepburn gave in and began to cry—at which point he yelled, “Action!”)

The original script ended with Arthur returning to the porch to comfort Alice, declaring his love and reassuring her that nothing has changed. That was  a sharp detour from the novel, which sent him scurrying politely for the door, never to return. (Poor Tarkington: RKO could never leave his bleak finales alone. A few years later, much to Orson Welles’ fury, they tacked a chirpy postscript onto The Magnificent Ambersons.) Hepburn and Stevens sought to leave it ambivalent, letting viewers decide for themselves whether the fragile romance would survive after the screen faded to black. But Berman believed that anything less than a happy ending would alienate the audience, and enlisted Cukor to plead his case with the director and star. Ultimately he won.

Aside from the ending, Alice Adams remained fairly faithful to the book and generally won praise from the critics. “What was in 1922 a shrewd and observant novel emerges in 1935 as a portrait of an era, uproariously funny and perceptive,” gushed James Agee, who was hardly a pushover. Audiences liked it too, boosting the box office for RKO. Hepburn’s losing streak—perilously long by Hollywood standards—was finally over.

Both the film and Hepburn got Oscar nods, but Mutiny on the Bounty captured Best Picture honors while Bette Davis won for Best Actress in Dangerous. Still, more than once, Davis said Hepburn should have taken home the trophy. She felt her victory was compensation for being snubbed, without so much as a nomination, for her riveting turn as the vicious, savage Mildred in Of Human Bondage a year earlier.

Not to worry, though: Hepburn would go on to win three more Academy Awards. And from 1935 on, she would carry the yearning, vulnerable spirit of Alice Adams with her through every part she played.