Thomas Gomez: The Soul Behind the Villain

You’ve seen him a hundred times. Maybe not in the center of the screen, but you always know he’s there.

The shambling menace, just off to the side. Maybe he’s got a score to settle. Or a hurt that won’t heal. Or maybe he’s handed his fate and what’s left of his conscience over to someone who’s stronger and smarter. He may want to give you a break. He may not. He may have to kill you. But he probably won’t be happy about it. 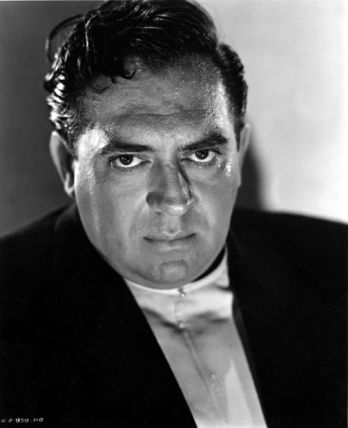 By virtue of his bulky frame, deep, slightly hooded eyes and raspy growl, Gomez was usually cast as the heavy. But he was so much more than that—and even his villains covered a lot of terrain. The hulking henchman who kept Bogie at bay in Key Largo was also Conan Doyle’s cunning Professor Moriarty and Shakespeare’s scheming Claudius on Broadway. But the gentle, thoughtful man behind all these masks never packed anything more threatening than a shrimp knife.

Gomez poured almost half a century of great performances into his 65 years—playing peasants and kings, priests and pentitents, victims and thugs, and even one ape. He began his career in heady company and never looked back. In 1923, straight out of high school, he won a scholarship to study with famed Shakespearean actor/director Walter Hampden, often called The Dean of American Theater (who went on to play a string of wise old patriarchs on film, including the father of William Holden and Humphrey Bogart in Sabrina). 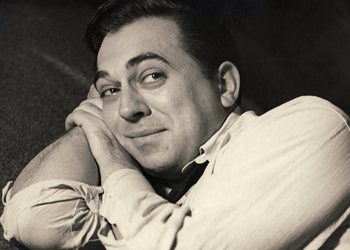 By the end of the decade, Gomez was touring with Alfred Lunt and Lynn Fontanne.  He spent most of the 1930s criss-crossing the country with their troupe, taking ever-larger roles in productions including Hamlet, Cyrano de Bergerac, Becky Sharp, Idiot’s Delight and The Taming of the Shrew.

His riveting work in two plays, The Sea Gull and There Shall Be No Night (featuring a young Montgomery Clift) caught the interest of Hollywood, where he was first cast as a murderous Nazi spy in 1942’s Sherlock Holmes and the Voice of Terror. Rootless when he arrived, Gomez lived at the Hollywood Roosevelt Hotel. An insatiable reader, he’d hang onto the newspapers left outside his door each morning until he had a chance to catch up on them. Never one to start a story in the middle, when he had an hour to spare, he’d ask the bellboy to lift the stack so he could snatch the oldest papers from the bottom.

When other film offers rolled in, Gomez, a homebody at heart, bought a modest house in the Hollywood Hills where he lived for the rest of his life, creating for himself the same kind of warm, safe cocoon he’d grown up in on Long Island.

Spanish on his father’s side (by way of Gibraltar and Santander, Spain) and French-Irish on his mother’s (courtesy of Alsace and County Cork), Gomez’s family migrated to New York from the Spanish Creole south shortly before he was born in 1905. With the Spanish-American War a recent memory and The Great War looming, jingoism was running hot and high, and blending in was the buzzword. But for Gomez, assimilation never meant capitulation: All his life, he legally kept the name he was born with: Sabino Tomas Gomez. And he vowed to take Hispanic roles only if he could play them “with sympathy, or at least humanity.”

That chance arrived in 1947, with Ride the Pink Horse. In lesser hands, the role of Pancho in Robert Montgomery’s classic film noir could have turned into exactly the kind of role Gomez despised. Universal’s own publicity department described the character as “a big, greasy, tequila-swilling slob, who has one brief glow of nobility.” (Okay the first half of that sentence is blatantly racist, and the second half makes no sense whatsoever. Nice going, Universal flack!) Gomez seized the chance to blow away every cliche—even those perpetrated by his own studio.

In Ben Hecht’s taut, terrific story, disillusioned war veteran Lucky Gagin (Montgomery) arrives in a Mexican border town to avenge the murder of a comrade. Pancho, who operates the local merry-go-round, risks his life to help him—and very nearly loses it when he’s brutally beaten by thugs as children watch helplessly, captive on the spinning carousel. You get the feeling that while this may be the worst beating he’s endured, Pancho has been knocked around all his life. He’s resigned to expecting the worst while still lifting his eyes in search of something better.

Gomez’s vivid, compassionate portrayal of a man who could easily have been reduced to a stereotype brought him his only Oscar nomination—the first ever for an American-born Hispanic actor. But in a stroke of bad luck to rival any of those found in his darkest films, he was up against Santa Claus. He lost the Oscar race to Edmund Gwenn for Miracle on 34th Street.

The late 1940s brought Gomez many of the best noir roles of his career. To each, he brought a deep, soulful sense of weary resignation, a feeling that life is gonna do to you what it’s gonna do to you, and you gotta do what you gotta do, and you’ll probably lose anyway.

In 1947’s Johnny O’Clock, directed by Robert Rossen from his own screenplay, Gomez plays a casino owner whose wife (Ellen Drew) had once been involved with his partner (Dick Powell). “Thomas Gomez is oily as the villain,” sniffed New York Times critic Bosley Crowther at the time. Really? Because to me he seemed pitiable.

“You can give me a kiss—it’ll make you look good in front of people,” Drew sneers at him on the balcony, as his workers—the only people over whom he has any control—play cards inside. Like a wounded lion, he lashes out and paws her roughly, but his face softens as he kisses her. Then he turns away in shame and limps, broken, back into the casino.

If you’ve never seen the movie (or even if you have), drop everything and click this link; the whole film is here.

Of course Gomez’s most famous noir role was Curly Hoff, Edward G. Robinson’s sweaty right-hand man in John Huston’s Key Largo. He doesn’t seem to like his boss any more than the people he’s terrorizing do. He knows what kind of guy he’s thrown his lot in with, and he’s not proud of it. But he’ll do whatever it takes to hang onto what little he has, including denying Claire Trevor that damn drink. Oh and killing people. The guy who has long since sold his soul is somehow creepier than the guy who never had one.

Humphrey Bogart summed up Gomez’s work as Curly—and a good chunk of his career—when he told him, after shooting wrapped,”That was the essential heavy, pal.”

Gomez turned from bloodless predator in Key Largo to desperate, hunted prey in Abraham Polonsky’s violent and disturbing  Force of Evil. Leo Morse is a small-time, “honorable” numbers runner, who’s managed to steer clear of the mob until his brother Joe (John Garfield), a charming, arrogant and completely amoral lawyer (redundancy alert!), goes to work for them—tasked with the job of either bringing operations like Leo’s into the fold or rubbing them out entirely.

Leo feels the walls closing in on all sides, bitter and sick with the knowledge that his own brother is doing most of the pushing. His fear and suffocation are palpable as he sees the little world he’s built for himself being slowly destroyed. I watched this film again last winter, when it was about 5 degrees outside, and I had to open a window. Somehow I thought that might help Leo a little. Gomez is that heartbreaking. (And you want to strangle Garfield. He’s a lot like Goff in Out of the Fog—only now he’s armed with a law degree.)

As the busy decade closed, Gomez even added a little touch of noir to the Christmas classic Come to the Stable, playing mobster Luigi Rossi, whom the good sisters (Celeste Holm and Loretta Young) are sure they can reform and hit up for a sizeable donation of property. Hmm, I wonder if they’ll succeed…

When he wasn’t holding Bogie and Bacall hostage, gunning for Dick Powell or fighting off adorable nuns, Gomez, a passionate progressive and union man, was serving on the board of directors of the Screen Actors Guild. He never married, and lived quietly and simply. His only nod to indulgence was a love of fine dining, with predictable results to his waistline.

And in the midst of racking up roughly 60 movie credits, Gomez shuttled back to Broadway whenever a great role came calling: Claudius in Hamlet, Professor Moriarty in Sherlock Holmes. and perhaps the ultimate villain, Oliver Cromwell in A Man for All Seasons.  He followed Burl Ives as Big Daddy in the original run of Cat on a Hot Tin Roof, winning superior reviews from Tennessee Williams (who later tapped him to play Papa Zacharias in the film version of Summer and Smoke). 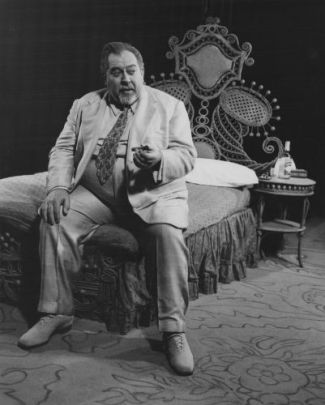 Throughout the late 1950s and 1960s, Gomez also guested on TV shows, including The Twilight Zone (in a memorable turn as Satan—the role he’d been building up to all his life), Route 66, Dr. Kildare, Burke’s Law, The Virginian, It Takes a Thief, Bewitched and The Rifleman. But if you really want to see him as never before, watch his fabulous turn as pool shark Chicago Chubby on this 1965 episode of Mr. Ed. (Spoiler alert: Ed beats him.)

In his last film appearance, Gomez played The Minister in 1970’s Beneath the Planet of the Apes. His last role ever was on Gunsmoke as Agustin, a Mexican farmer who risks his life to save a wounded Matt Dillon. In May 1971, Gomez was grievously injured in a car accident in Santa Monica, and succumbed to his injuries a month later. He was 65 years old.

Thomas Gomez once said that no matter how flat a role may have appeared on paper, he tried to infuse it with “some rascality, warmth and dimension.” Sleep well, Sabino. You met your own high standards a thousand times over.