There are worse ways to spend a weekend than following Shirley MacLaine around Hollywood. 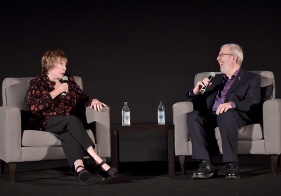 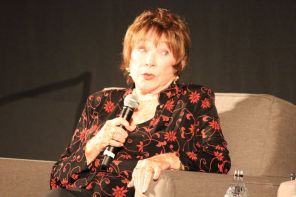 The 81-year-old Oscar winner, whose career stretches back to the end of the Golden Age, was a featured guest at the recent TCM Classic Film Festival. But when she settled into Grauman’s Chinese Theatre with Leonard Maltin to talk about The Apartment, her microphone began screeching like a crazed owl. “We’re getting a lot of feedback here,” she called politely offstage. “Whoever’s in charge of that? Fix it.” Prompting the guy next me to say of the strong, smart, insanely accomplished actress, “Oh wow, she is so sassy!”

MacLaine was anything but when she talked about director Billy Wilder, calling on her memories with a reverence tempered by realism.

“I liked him a lot,” she smiled, and suddenly she was Fran Kubelik again. “He was very funny and very sensitive when it came to what he thought would be best for the screen. At times he was very brittle with women, but in the end you were better for it.” 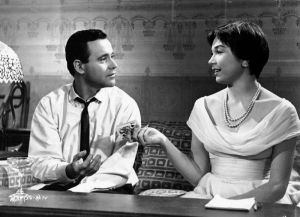 Initially in awe of the autocratic director, MacLaine turned to her co-star, Jack Lemmon, for refuge—and Wilder and co-writer Izzy Diamond, who had started shooting with only a bare-bones script, filled in the blanks as they watched the friendship deepen. They tuned into “every little sigh, and disappointment, and joy and happiness and made little notes,” recalled the actress. “The love affair [between C.C. and Fran]… became basically what they had observed.”

Even the couple’s running card game was inspired by MacLaine’s real life:  “I was hanging out with the Rat Pack a lot and a couple of gangsters were teaching me how to play gin rummy, how to cheat,” she laughed. “That’s why Billy put the gin game in—because he was fascinated with who my compatriots were.”

Her heartaches also figured prominently in the script. “Billy and I were having lunch one day,” she confided, “And I was having a love affair that wasn’t working and I said, ‘Why do people have to be in love with people anyway? Why can’t we be in love with giraffes?’ or something to that effect. And he said, ‘That’s it, that’s it!’”

Though they’d already shot a scene where C.C. and Fran swap stories of their failed romances, Wilder ordered the sets rebuilt and rewrote whole the sequence from scratch—starting with the line,”Why do people have to love people anyway?”

The new scene passed muster with the man who mattered most to Wilder: his long-time editor Doane Harris, who was an associate producer on The Apartment. “He was Billy’s secret,” MacLaine revealed. “He would say—and I heard this because Billy didn’t mind—‘Billy, you gotta shoot that whole day over—you did not break my heart today.’ And they would reshoot it. See, that is where trust comes in. Billy didn’t even ask why—he just did it.”

Wilder went on to win three Oscars in one night—as producer, director and co-writer—for the film, which was also the second of seven Lemmon-Wilder pairings. “At that point in his career, Jack needed to be wrangled, so I kind of  helped with the rope,” MacLaine smiled. “But those two… Jack was in love with Billy’s genius, and Billy was in love with Jack’s talent.”

The next day, during an interview at Club TCM, MacLaine and Maltin circled back to the pair.

“Jack was a darling, such a good person, kind to other people,” the actress confided. “He was a sweetheart—but Billy pushed him to the limit! He was seeing how far probably the best actor in drama and comedy could go and still be honest with it.”

“And Billy taught me how to be self-reliant and to take criticism,” she recalled, adding that her training as a dancer helped: “Choreographers are made to make you miserable—I was used to that. So when this incredible Austrian came at me, I thought okay, just show me the step.”

MacLaine’s first director, Alfred Hitchcock, was hardly a pussycat either—though she had an easier time of it than some of his other leading ladies. “When we made The Trouble With Harry, I was his social eating partner,” she recalled with some relief. “With all the beautiful, blonde, tall, willowy actresses that he wanted to jump on, that didn’t even occur to him! I was one of the few! I ate.”

The droll director also loved Cockney slang and wordplay. “’He’d go, ‘Before you say that line, dog’s feet!” she explained as the crowd tried to puzzle it out. “Paws! It meant pause!”

Given the string of the prickly geniuses who’ve directed her, it’s surprising that she saved her harshest words for… Herb Ross: “Annie Bancroft was a little aloof when we worked on The Turning Point, but with Herb, that was the way to go. He could be sarcastic. The women on Steel Magnolias got together against him. He was cruel to Julia Roberts and Dolly Parton—he would say, ‘You know, you should take some acting lessons.’ So we didn’t like that and we basically stuck together and still have—girlfriends from that movie.”

“But it’s not always the director who sets the tone on the set—sometimes, it’s an actor,” she added. “But enough about Debra Winger…” And that was just one morsel of the hour-long Dish Fest. Here are MacLaine’s takes on some of her other co-stars: 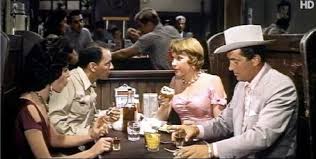 Fred MacMurray (The Apartment): “He never picked up a lunch check… his money blinked when he took it out of his wallet—it had never seen the sun. He was so cheap that [his wife] June [Haver] would make him his lunch in a brown paper bag, so he wouldn’t have to pay at the commissary. We used to tease him for that.” (Though you have to admit, it’s pretty freakin’ adorable.)

Frank Sinatra (Some Came Running and Oceans Eleven): “He loved the spontaneity of not knowing what he was going to do. I think he suffered from the same thing Ernie Kovacs suffered from and which is, ‘If I really rehearse, if I really look like I care and it doesn’t work then it’s my fault.’ So this way he could say, ‘Well, I didn’t have time to rehearse.’ Which was rather canny.”

Robert Mitchum (Two for the Seesaw): “We had a three-year relationship kind of under the radar. You didn’t know? Neither did he! Very intelligent, much more cultured than he wanted you to think. He had a photographic memory—he could read a script and word for word recite it back to you. Frankly, I think that’s sick! But he was a bit of an emotional coward, so I loved the contradiction. It gave me so much work to do! I just loved shoveling through what he really was. But that stuff about him working on a chain gang [following his conviction on a marijuana charge]? Maybe he filled a pothole for 20 minutes… but that’s the image he cultivated.” 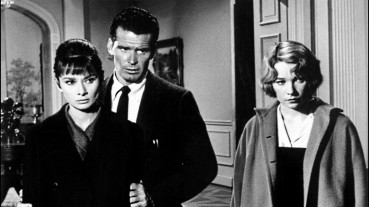 Laurence Harvey (Two Loves): “I did not like Larry Harvey. I turned down Breakfast at Tiffany’s to do Two Loves with him. Did you see that? No? Good.”

Dean Martin and Jerry Lewis (Some Came Running, What a Way to Go and Oceans Eleven with Martin; Artists and Models with both): “Dean was the funniest man I ever knew. Very much like Sinatra in always wanting to look like he’s not really working. Not Jerry. Jerry was like a drill sergeant. Dean used to try out material on me, because my favorite thing is to laugh. Of course, he couldn’t really judge because I would laugh at anything and he’d try it on his live audience and it would flop. I adored him—had a mini-crush on him. But I liked his wife more.”

James Garner (The Children’s Hour): “He’s the second funniest, next to Dean. In real life, hilarious. Such an educated sense of humor—such an observant sense of humor about anything that was going on on the set. Did he ever play a character like that? The ones that he’s famous for, they were straight. But he was a really extraordinarily comic man.”

Audrey Hepburn (The Children’s Hour): “Lovely, lovely person. Whenever I went to Europe, I would go to Switzerland and see her. I miss her. She taught me how to dress and I taught her how to curse.”

Clint Eastwood (Two Mules for Sister Sara): “I remember when his horse was acting up, this is when I knew he’s a true Republican: He got off the horse, looked at the horse, and socked him.”

Jack Nicholson (Terms of Endearment): “I never knew what he was going to do. When Aurora goes up to his door saying, ‘So you asked me go to lunch—a year ago,’ he was supposed to have his clothes on, but every time he came to the door, well, once he came in a robe, and the next time he came with his shorts, and the third time he came with a hooker, and the fourth time with nothing.” Prompting an audience member to blurt out the question on everyone’s mind: “What did it look like?” Never one to swing and miss at a fat pitch, MacLaine quipped, “It’s too long a story…”

Meryl Streep (Postcards from the Edge): “The best. Just the best. The scene on the stairs, when I’m talking about my dress ‘twirling up,’ she actually lost it during one take. That’s the highest compliment—that Meryl Streep went out of character!”

Maggie Smith (Downton Abbey): “Love her. I think we should make a movie together.” (Prompting Maltin to chime in, “Just not another one about a hotel in India.”)

Elvis Presley: “Incredibly sweet and polite. When I was starting out, my trailer was right next to his. And he always called me ‘Miss MacLaine’ or ‘Ma’am.’ I was 20.”

Whew! With memories like these, what could be next for Miss MacLaine? She’s already given it some thought: “I would love to remake Harold and Maude!”