Ah, classic movie love scenes! Scarlett and Rhett on the bridge in Gone with the Wind. Rick and Ilsa on the tarmac in Casablanca. Kathy and Heathcliff on the moors in Wuthering Heights. Frank and Paula on a seedy street corner in D.O.A.

Oh yes, people! Tucked amid the sleazy bars, poisoned cocktails, glowing toxins and creepy villains is one of the most romantic scenes in all of film—filled with more longing, love and loss than you’ll find in a hundred bodice-rippers.

When first we see Frank (Edmond O’Brien) and Paula (the approachably gorgeous Pamela Britton), the setting couldn’t be less romantic: an accountant’s office. But right away, we know at least one of them is in love, when Paula throws the fish-eye to the chippy who’s draped herself across Frank’s desk as he’s eyeing her deductions. 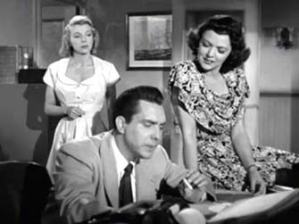 Frank is wrapping up some work before heading to San Francisco on vacation—alone. Seems that although he and Paula have been seeing a lot of each other, he’s still burned and bruised from a bad marriage, and she’s, well… I hate the word “needy” because really, who among us hasn’t been desperately in love and grasping at any shred of reassurance we can get our hands on? But yeah, she’s a little clingy.

Later that day, over drinks at the pub downstairs, Paula’s trying to be brave. “I’m not going to crowd you any more, Frank,” she says, fighting her impulse to handcuff him to her handbag. “Go to San Francisco.” (Then she calls and leaves a message at his hotel literally before he arrives.)

Frank gets to the St. Francis just in time for a hoppin’ convention—it’s the Market Week Summer Shindig!—and leaps into the spirit of things pretty damn quickly: no sooner has he checked in than he’s checking out the local talent. He’s even scoping out skirts while he’s on the phone to Paula back home.

But a classy hotel is no place to rumba with complete strangers, and soon the conventioneers, with Frank in tow, high-tail it to a dive bar on the wharf to take in some bad jazz and worse drinks. Frank’s bourbon tastes especially funny…

The next morning, he feels so hung over he heads for a doctor’s office, where tests reveal he’s ingested iridium, a “luminous toxin” with no antidote. A second doctor confirms the poisoning—and when he learns that Frank has no idea how it happened, says it must have been deliberate. 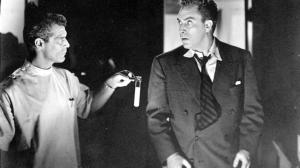 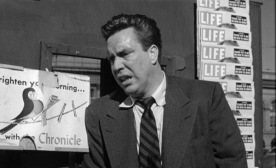 Desperate and devastated, Frank sets off on a frantic search for his killers that leads him up and down San Francisco and finally to Los Angeles. And Paula, frightened at how he’s sounded on the phone, follows him there.

When she steps out of the shadows onto the street, it’s as if he sees his whole life before him—a life that was his for the taking just yesterday.

“Look at you, you’re a sight! Your clothes look like you’ve slept in them! Are you ill? You are—you’re feverish!” Paula cries, gently dabbing his brow with her handkerchief. “What is it, Frank? If you’re in any kind of trouble you certainly can trust me!” He could trust her with his life, and now realizes, too late, that he should have. If he hadn’t left her… if he’d stayed home… he would have gotten the phone call that would’ve warned him…

“Oh don’t be frightened Paula!” he tells her, pulling her even closer. “Don’t ever be frightened of anything again, will you promise me that?”

“I love you so much, darling, more than you seem able to understand!” she says, fervent as a prayer. “I never really knew happiness until I loved you. Sometimes when I used to be afraid that you weren’t sure how you felt, I tried to hold back, but I couldn’t. Losing you would have meant losing everything! There would have been nothing left!”

“Don’t, Paula, don’t!” says Frank, all but collapsing under the weight of regret.

“Now I’m afraid again! Somehow I feel that I’m going to lose you but there’s nothing I can do about it! I feel so helpless—you’re leaving me out of something! Tell me Frank, what is it?” she pleads. “Give me a chance to fight back, just give me a chance, please! You do love me, don’t you?”

Almost before she can finish the question, he cries,”Oh yes, Paula, I love you! I never was more certain of anything in my life! I wasn’t sure before, I was a little blind, I guess, but believe me, I’m sure now, can you understand that Paula?”

“A man can be like that, Paula, something has to happen, it can be a big thing or a little thing, but it can make him realize how much someone means to him, how much he really loves her,” he says, reassuring her even as he tortures himself. “Oh and I love you Paula—more than I ever thought it possible to love anyone in the world, I love you.”

He urges her to go home, but she refuses, and he promises to meet her later in the lobby of the nearby hotel.

“You’re sure, you promise?” she asks. And he does.

Then in his last moment of anything approaching normal life, he asks, like any good husband, “Is that a new outfit?”

“Well it’s beautiful,” he smiles. He takes her head in his hands and kisses her, and wraps her up in his arms.

“Yes Paula I’ll come back, I promise,” he tells her, wishing it were true.

Seeing everything he’s lost, everything that could have been, standing right in front of him, he holds her one last time.

One final kiss, and he frames her face in his hands and turns to walk away. But he looks back, and looks back again, before leaving her for the last time.

You know the rest, or you can guess. And Frank’s last word as he collapses in the homicide detective’s office? Paula.

D.O.A. was produced by Leo Popkin’s ill-starred Cardinal Pictures, and because its copyright was never properly renewed, it’s fallen into the public domain. Here’s one of the better YouTube prints. The love scene starts at the 1:08:51 mark, though you’ll want to watch the whole thing…

By the way, there’s another reason that this movie, and that scene, are especially close to my heart: I adore Edmond O’Brien. It’s not just that he’s an incredibly natural actor who can do anything, and whose deep, tender voice is an instrument of the gods. It’s that I think he’s a total heartthrob. 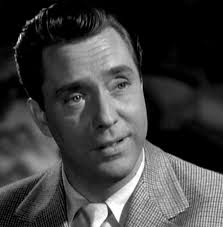 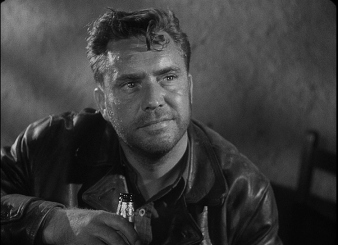 A skeptical friend and I recently saw him in The Hunchback of Notre Dame on the four-story-high screen at Grauman’s Chinese Theater, and she said afterward, “Ah, now I get it.” But no. I don’t mean when he was gorgeous. I mean when he was chunky and craggy. Doughily hot! The Edmond O’Brien of the ’40s and ’50s—oh my God I just want to lock him in a room. If I were Paula, he never would have made it to San Francisco. He wouldn’t have gotten as far as the door. 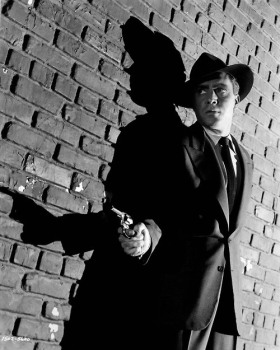 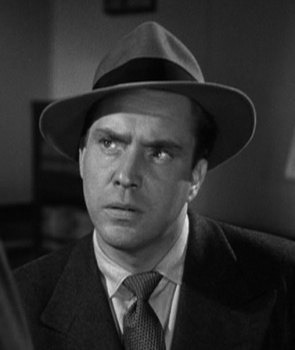 This article is a sneak preview of the “…And Scene!” Blogathon, hosted by Sister Celluloid. Starting on Thursday, June 25, read all the fabulous entries here!

Leave a Reply to The Distracted Blogger Cancel reply