Regular readers may recall just how very un-monstrous Boris Karloff was offscreen, visiting children’s hospitals to play Santa Claus and read bedtime stories—and even charming the little girl who played Maria in Frankenstein while bolted into full makeup. But can we talk for a minute about how insanely elegant he was? 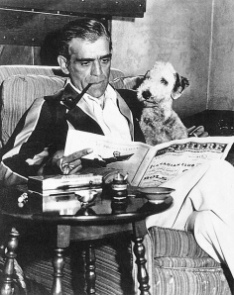 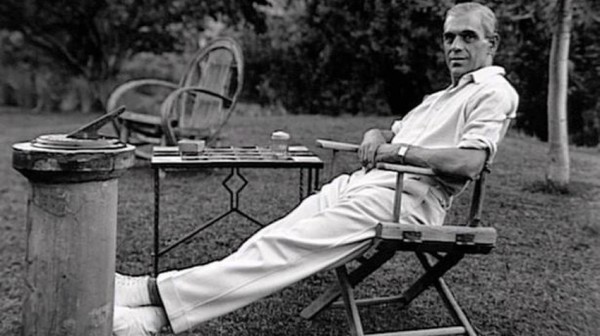 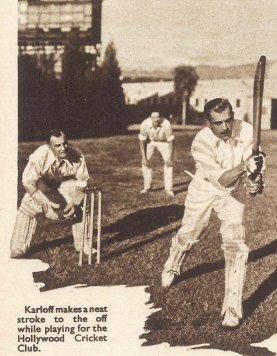 He was the kind of guy who’d put sherry in his guacamole.

No really. I have proof. 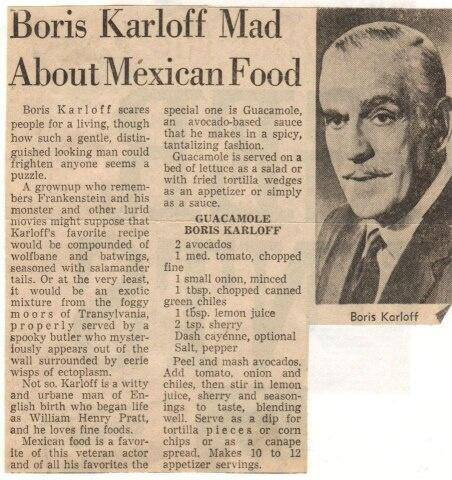 Notice the cayenne is optional. The sherry isn’t.

And while most of us have to shlep to the grocer’s to make “avocado sauce”—and props to the reporter for describing guacamole as if it were an alien life form—Boris only had to head out to the backyard. He’d transformed his Beverly Hills estate into an earthly paradise—a sprawling, formal lawn ringed by lush flower beds and orchards dripping with oranges, grapefruit, lemons, limes, plums, peaches and yes, avocados. The only thing missing from his Eden were the apples and the snakes. And he tended his garden lovingly, every day, no matter what else he had going on.

“I’ll never forget, before we worked together in The Mask of Fu Manchu, during the summer we had a terrible drought,” co-star Charles Starrett once recalled. “Boris was making Frankenstein, and I lived above him in Coldwater Canyon. One evening, I was driving home when I suddenly nearly drove my car into a ditch—there in the beautiful garden was The Monster himself, tenderly watering the roses. Boris was such a dedicated gardener, he was afraid he’d lose the roses to the heat, so he rushed home without taking off his makeup to catch them at sundown, the best time for watering. It was quite a sight…” 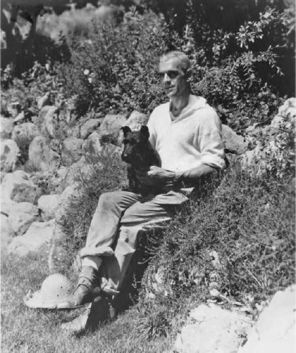 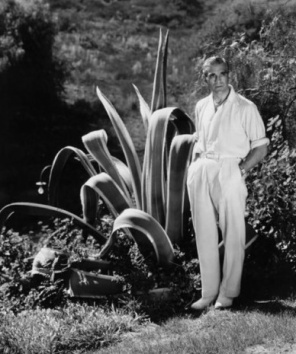 His garden was such a heaven on earth that some of his friends longed to spend eternity there. “They loved to wander through the garden with Boris while he worked on it—they’d talk about their old times in the theatre,” remembered Karloff’s fourth wife, Dorothy. “They were very dependent on him when they were alive, and they loved the garden. That’s the way they wanted it—to be in a place they loved and to be near him… he felt it was his responsibility to do as they wished.”

Thus it came to be that the cremated remains of several of Boris’s oldest friends were buried among the roses behind his farmhouse. But Los Angeles real estate being what it is, a later owner subdivided the sacred space. Grieved Dorothy, “Pity they had to build all those ugly houses on top of them.”

TINTYPE TUESDAY is a regular feature on Sister Celluloid, with fabulous classic movie pix (and usually some backstory!) to help you make it to Hump Day! For previous editions, just click here—and why not bookmark the page, to make sure you never miss an edition?