In THE MIRACLE WOMAN, All Eyes Are on Stanwyck—Especially Capra’s

There’s a certain luminous quality that shines through when a director is in love with his leading lady. In Frank Capra’s The Miracle  Woman, starring Barbara Stanwyck, it’s all over the screen.

This was the second film for these kindred spirits—whose relationship got off to such a rocky start, the real miracle is that they ended up working together at all. 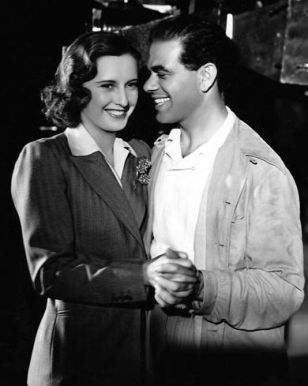 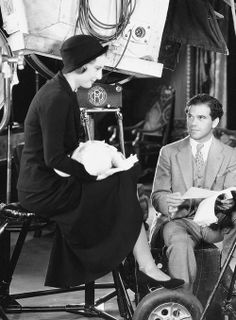 In 1930, as Capra prepared to shoot Ladies of Leisure, he got an urgent call from Columbia boss Harry Cohn.

“He asked me to talk to an ex-chorus girl who made a hit in a stage play called Burlesque,” Capra recalled in his memoir, The Name Above the Title. “He had a hunch about her. I was annoyed. I had a girl already set.

“She came into my office sullen, plainly dressed, no makeup,” he went on. “Obviously hating the whole idea of the interview, she sat on the edge of her chair and answered in curt monosyllables. I didn’t want her before she came in, and what I saw of this drip made me sure of it. After about thirty seconds of the usual inane questions… she jumped to her feet and and snapped, ‘Oh, hell, you don’t want any part of me,’ and she ran out. I phoned Cohn. ‘Harry, forget Stanwyck. She’s not an actress. She’s a porcupine.'”

When Stanwyck came home in tears, her husband, comedian Frank Fay, called Capra in a rage. According to the director, it went something like this:

“Look, fella, what the hell did you do to my wife?”

“Well she came home crying and upset. No one can do that to my wife!”

“Listen, funny man, I don’t want any part of your wife, or of you. She came in here with a chip on her shoulder, and she went out with an axe on it.”

Fay chalked Stanwyck’s defensiveness up to nerves and urged Capra to view a brief screen test she’d made for The Noose, for Alexander Korda over at Warner Bros. The director reluctantly agreed to spare the three minutes.

“The test flashed on the screen. Nothing in the world was going to make me like it,” Capra recalled. “After only thirty seconds I got a lump in my throat as big as an egg… never had I heard or seen such emotional sincerity. When it was over, I had tears in my eyes. I was stunned.” 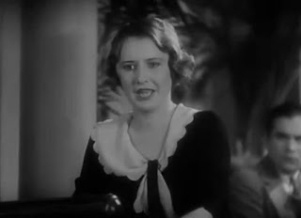 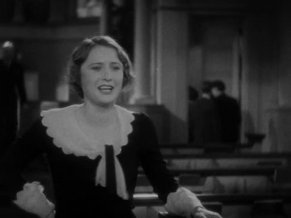 Capra bolted from the screening room to call Cohn:

“Harry! Harry! We’ve got to sign Stanwyck for the part…”

“What’re you, nuts? A half-hour ago you told me she was a kook!”

“Yeah, yeah but I just saw a test of her—she’ll be terrific… don’t let her get away.”

Within the hour, Stanwyck was signed for Ladies of Leisure. But it was her next project with  Capra, The Miracle Woman, that’s probably the biggest sleeper of his long and legendary career.

Based on the play Bless You, Sister by Robert Riskin and John Meehan—with generous dollops of inspiration from the notorious evangelist Aimee Semple McPherson—The Miracle Woman centers on Florence Fallon (Stanwyck), whose father, a preacher, has been shunted aside by his congregation for a younger man.

On the morning he’s to deliver his final sermon, Florence takes to the pulpit to announce he’s just died in her arms—and delivers a blistering diatribe of her own: “You killed him! For thirty years, he tried to touch your stony hearts with the mercies of God—and failed. Why? Because you don’t want God!” As she starts to single out the churchgoers for their sins and hypocrisies—drinking, carousing, the usual stuff—they scurry from their pews toward the exits. 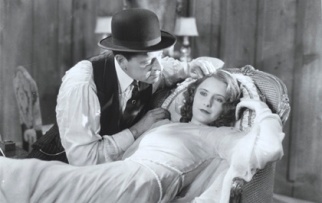 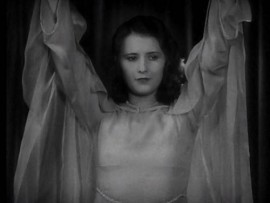 It’s the kind of scene that usually caps off a movie rather than opening one—but Stanwyck is just getting started. And so is Florence: one of the few people who doesn’t flee the church is Bob Hornsby (Sam Hardy), a local huckster who tells her how she can “get famous, get rich, and get even.”

“Religion is like anything else,” he purrs, sidling in closer. “It’s great if you can sell it, no good if you give it away.” The two team up for a traveling tent show called the Temple of Happiness, complete with fire, brimstone and “miracles”—designed to bring desperate people closer to God and further away from their money.

One day, as Florence  promotes the show on a local radio station, she actually saves someone. John Carson (David Manners), a flier who was blinded in the Great War, has just had the latest in a long line of rejections from music publishers sending back his songs. He’s mailed them off to every company in the phone book, from A to Z. “Where do you go after Z?” he despairs. His answer: to the window. But just before he’s set to jump, he hears Florence’s voice from an apartment across the courtyard: “What did God give man the backbone for? To stand up on his own two feet! Beethoven wrote his greatest symphonies after he went deaf… God can forgive a sinner, but not a quitter!” 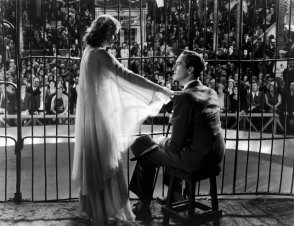 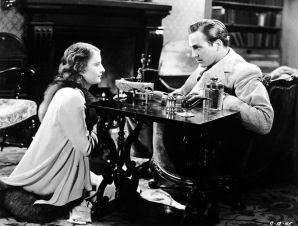 John backs away from the ledge as if struck in the face, and shows up at the tent show that night—even taking to the stage to help Florence re-enact the parable of Daniel in the lion’s den. (With real lions. In these days before process screen photography, the only thing separating the actors from the animals was a thin piece of netting. “I could smell their breath,” recalled Manners, but I’m guessing the poor lions were even more miserable than he was.)

John is thrilled when Florence follows up their first meeting with several visits to his dingy little flat—but he’s nervous and awkward, falling back on sleight-of-hand card tricks to entertain her. To express his growing affection, he even hides behind his wooden dummy, who confides, “He keeps me locked up until he gets in a jam and then he hauls me out.”

(Yes, he does card tricks and a ventriloquist act. Somebody shoot me. But in the hands of David Manners, it’s touching and charming.) 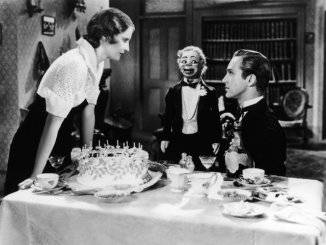 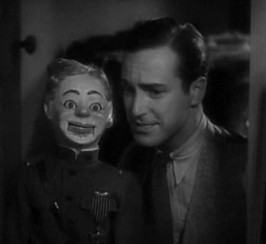 Florence is falling hard too, and the more time she spends with John, the dirtier she feels onstage as a “miracle woman.” His tenderness and trust wear down her bitterness until she can no longer tolerate the fraud she’s neck-deep in—but she can’t seem to pull herself out either. “I don’t know how to play on the level any more,” she confesses to John. “And God wouldn’t believe me under oath.”

Determined to restore Florence’s faith in herself, John pulls some gallant fakery of his own—and even though she sees through it, she’s inspired enough to give up the grift, whatever the consequences. Much as she leapt to the pulpit of her father’s church, she takes to the stage and tells the gathered faithful a few truths they don’t want to hear. The results are shattering. 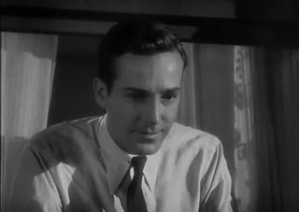 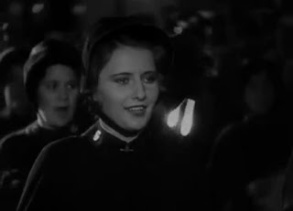 Capra said The Miracle Woman failed to follow his intended vision of “one woman’s life in three acts: disillusion, venality, conversion.” Credit Stanwyck with that “failure”: nothing is ever that cut-and-dried with her. Even at her most “venal,” a conscience is beating beneath—and when she regains her faith, it’s with a wariness that never completely melts away.

As Capra quickly discovered, much of Stanwyck’s power came from throwing everything she had into her first take—whether the cameras were rolling or not. “All subsequent repetitions, in rehearsals or retakes, were pale copies of her original performance,” he recalled. To harness that raw emotion rather than squander it on prep work, “I had to rehearse the rest of the cast without her, work out the physical movements without her.

“And the crews had problems,” Capra explained. “I had to take the ‘heart’ of the scene—the vital close-ups of Barbara—first, and with multiple cameras so she would only have to do it once.” He would go over the scene in the dressing room with his star, working through the emotions while never allowing her to act anything out. Then, as she stepped onto the soundstage, he’d gently remind her: “No matter what the other actors do, whether they stop or blow their lines—you continue your scene right to the end.” He marveled that “she remembered every word I said—and she never blew a line.” 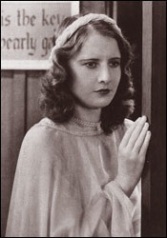 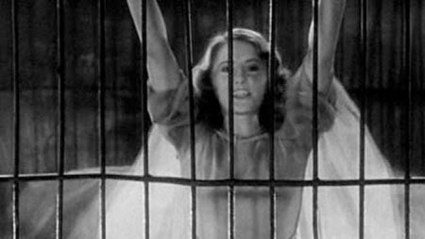 Capra and Stanwyck would go on to make three more films together: the melodrama Forbidden, the wildly underrated The Bitter Tea of General Yen, and the classic Meet John Doe.

“Underneath her sullen shyness smoldered the emotional fires of a young Duse, or a Bernhardt,” Capra recalled in his memoir, still thunderstruck decades later. “Naive, unsophisticated, caring nothing about makeup, clothes or hairdos, the chorus girl could grab your heart and tear it to pieces. She knew nothing about camera tricks, how to ‘cheat’ her looks so her face could be seen, how to restrict her body movements in close shots. She just turned it on—and everything else on stage stopped.

“It’s true that directors often fall in love with their leading ladies—at least while making a film together,” he admitted. “I fell in love with Stanwyck, and had I not been more in love with Lucille Reyburn I would have asked Barbara to marry me after she called it quits with Frank Fay.”

When she accepted her Lifetime Achievement Award from the American Film Institute in 1987, a radiant Stanwyck said the time she spent with Capra was the key to everything that came after. “Frank Capra… taught me what film was all about and what film could do for me and what I could do for film… each day was a learning process and it was wonderful… that’s why I’m here tonight—Mr. Frank Capra.”

A typically modest assessment of her own power onscreen, which a gifted director felt instantly, honored reverently, and harnessed brilliantly.