Welcome to another edition of STREAMING SATURDAYS, where we embed a free, fun movie for you to watch right here! This week: Green for Danger, a British thriller set in a wartime hospital.

During World War II, lots of filmmakers turned their lenses toward the battlefield, churning out glorious tales of valor and heroism. But two Brits chose instead to mine the greatest hopes, the deepest dreads and the biggest sacrifices of those who remained behind.

The writer/director team of Frank Launder and Sidney Gilliat, who produced films under the banner of Individual Pictures, were sort of a workingman’s Powell and Pressburger. Time and again, in more than 40 movies across four decades, they cannily captured the current mood of their country—always with wit and brains to spare, but never quite the same way twice. “Versatility was always our curse,” Gilliat once mused, reflecting on why they never fell into fashion with the film-school set.

By 1940, the pair had already written the screenplays for two classic thrillers: Alfred Hitchcock’s The Lady Vanishes and Carol Reed’s Night Train to Munich. But as the war closed in, their work hewed much closer to home—anticipating the rise of what’s condescendingly called kitchen-sink realism—with films such as Millions Like Us, set in an aircraft factory, and Waterloo Road, a gritty portrait of the homefront in south London.

But it was one of their post-war films, Green for Danger, that most vividly crystallized their country’s wartime anxieties, thanks to an insightful script, the moody camerawork of Wilkie Cooper, and a cast and crew still deeply unsettled by the events of the preceding years. Trevor Howard had been honorably discharged from the British Army in 1943, due to unspecified emotional issues. Sally Gray was working on only her second film after a five-year hiatus following a breakdown. And Leo Genn, a Cambridge-educated barrister before he became an actor, had fought valiantly with the Royal Artillery, earning the French Croix de Guerre. He then helped investigate and prosecute Nazi war criminals—which required him to visit the recently liberated Bergen-Belsen concentration camps. 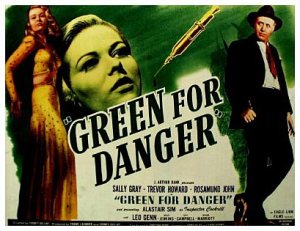 Shot mostly at Pinewood Studios in 1946, Green for Danger—adapted from a novel by Christianna Brand, whose husband was a military medic—was the first commercial film made there after the war. But it’s set in August 1944, when “Doodlebugs” or buzz-bombs were still falling all over southeast England.

Early in the film, the local postman is strafed by an air attack and brought to the hospital with seemingly treatable injuries—but dies mysteriously on the operating table. The ensuing investigation targets the anesthesiologist, Barney Barnes (Howard), who’d earlier lost a patient under similar circumstances.

But then things get even more complicated: At a local dance attended by hospital staff, a nurse sprints up to the balcony, tears a record off the turntable, and calls out to the crowd that the postman’s death was no accident—and that she knows who killed him. Then she bolts off into the windy night to retrieve the evidence. In a genuinely harrowing scene worthy of Val Lewton, she frantically slips in and out the shadows until finally, one overtakes her.

Now, with at least one confirmed murder on its hands, Scotland Yard sends Inspector Cockrill (Alastair Sim) out to investigate. In stark relief to the deepening anxiety all around him, this is a man who coolly lives in his head, believing it’s the smartest place on earth. Wry and sardonic, he takes guiltless glee in his unnerving effect on the doctors and nurses.  “My presence lay over the hospital like a pall,” he confides to the viewer. “I found it all tremendously enjoyable.” And just like that, we find ourselves falling for a character whose smugness would be off-putting in the hands of almost anyone else. We even feel for him when, while up in bed reading a murder mystery, he breaks into a self-satisfied grin at guessing the killer—only to peek at the last page and discover he’s wrong.

Time and again, Cockrill’s droll irreverence cuts through the mounting tension, as bombs fall outside, suspicion grows claustrophobically thick within the walls of the hospital, and the two lead physicians, Dr. Barnes and Dr. Eden (Genn), spar over the affections of nurse Freddi (Gray). When they finally wind up brawling on the floor, the good inspector pulls up a chair and lays odds.

The undercurrent of loathing between the two men runs through the entire film, pitting the blue-collar Dr. Barnes against the former Harley Street surgeon at every turn. (But then it wouldn’t be a British film without class issues bobbing up somewhere…) And the smoothly predatory Dr. Eden has no scruples about taking advantage of the growing unease to press his advantage. In fact, his honest compassion toward an emotionally fragile nurse whose mother was killed in a bomb attack is pretty much the only thing that rescues him from total heel-dom.

But somehow, with his soothing bedside-manner baritone, Genn makes even smarm seem elegant. And his skirmishes with the rougher-edged Howard, whether the two are on their feet or on the floor, make us want to pull up chairs ourselves. 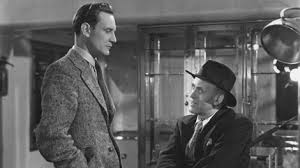 Of course, amidst all this romantic intrigue, there’s still a murderer at large, against an irresistible backdrop: What should be the safest place in the world has become the most dangerous. “What appealed to me was… the rhythmic ritual, from wheeling the patient out to putting him out and keeping him out (in this case, permanently), with all those crosscutting opportunities offered by flowmeters, hissing gas, cylinders, palpitating rubber bags, and all the other trappings, in the middle of the Blitz, too!” Gilliat told Geoff Brown in his book Launder and Gilliat.

This potential for mayhem was precisely what terrified the British censors: They sent a letter to the producers advising against making the film, worried that wounded soldiers would avoid military hospitals out of fear that killers were running loose among the staff. Through the grace of the movie gods, that letter was never received (or perhaps it somehow… disappeared). The censors then banned the completed film on the same grounds. But in both cases, their qualms were rooted in Brand’s original novel, which is set in an army hospital, whereas the film moved the action to civilian turf. That seemed to calm the guardians of the gates, and the movie was released with only minor cuts. What’s left is 85 minutes of near perfection. Enjoy!

STREAMING SATURDAYS is a semi-regular feature on Sister Celluloid. You can catch up on movies you may have missed by clicking here! And why not bookmark the page to make sure you never miss another?