Bette and Joan, The Way It Should Have Been 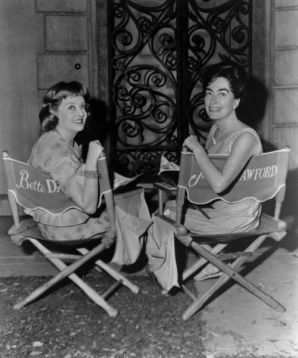 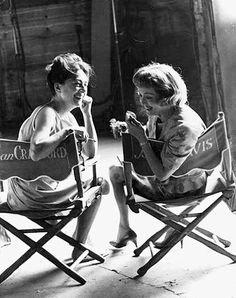 The first pic is a publicity shot, for What Ever Happened to Baby Jane. But the second one, it just kills you, doesn’t it? This is the way it should have been, always, with Bette and Joan: Smart, tough, gorgeous, crazy-talented comrades in arms against the big bosses in Hollywood, who nickel-and-dimed them while they brought in millions and then dumped them when they hit their forties. (When they teamed in their fifties for Baby Jane, Jack Warner sneered, “No one will pay to see those two old broads act.”)

It’s believed that the Davis-Crawford feud started over Franchot Tone, of all people, whom either one of them could’ve taken in two falls out of three. In the midst of a painful divorce, Bette had become smitten with Tone while they made Dangerous—but he and Joan were already involved and would soon marry. If he were free, who knows? Maybe he and Bette would have had a fling, maybe not, and it probably would have fizzled, the way most Hollywood romances did. But Joan had snatched him away, and that was that—the blood hatred was on. And it fed on itself and festered, on both sides (though a bit moreso on Bette’s), for dismal decades.

But boy, if they had joined forces, what a team they would have made. What a waste of their dazzling fire that they spent even a spark of it burning each other.