FEUD: BETTE AND JOAN! The Cast and Creator Open Up at a Sneak Preview of the Finale

“She was such a treasure,” said Lange at a Q&A hosted by the Film Society of Lincoln Center, following a sneak preview of the Feud: Bette and Joan finale. “She was never given the credit she was due. And when I went back and watched her films, she was a lovely actress, very subtle… obviously she had a style, that MGM style, but underneath it all, she was very real.

“People think of the glamour and the Hurrell photographs,” she added, “but there was so much more to her than that and it was thrilling to discover.”

Lange said she felt pressure to do right by Joan, who has been camped up and torn down for decades now. “I don’t think she got a fair shake from her daughter or from the film that was made,” she said, not daring to utter the name of the movie or the daughter, lest Faye or Cristina spring full-blown from the floorboards. “I do think she was maligned and she never got an opportunity to defend herself, of course. We dealt very fairly with Joan and created a character with all her strengths, vulnerabilities, peevishness, humanness. I hope in some way that brings another dimension to the way she’s seen. I hope we created a different idea about this woman, who was quite extraordinary.”

Focused mainly on the filming of What Ever Happened to Baby Jane,  the miniseries captures an especially unhappy, even desperate, time in the careers of Joan, Bette Davis (Susan Sarandon, who skipped the Q&A), and director Robert Aldrich (Alfred Molina). As far as the studios were concerned, Aldrich’s sin was that his films, though often critically praised, were commercial flops. Joan and Bette’s sin was that they continued to breathe past 40.

“I’m 52 and I feel like I’m just getting started, but for Bette and Joan, they were done,” said Feud creator Ryan Murphy, who also directed and co-wrote a few episodes. “And I just think about how unfair that is. I think the saddest thing in life is lost potential.”

“They all came together at a time of great need, trying to resuscitate their careers, keep themselves relevant and valid,” said Molina.

Lange agreed: “I think that’s typical of especially what happens to a women’s career at that point. You’re still in there scrapping and fighting and thinking, ‘This next role is going to bring it all back. This next role is going to make a difference.’ You think it’s out there but it isn’t, and yet you address the situation as if you still have some kind of control. This thing of struggling to resurrect something that is long gone is where the real human sadness of it exists, the poignancy… there’s still that thing of trying to hold on.”

The early days on the Baby Jane set held the promise that its long-feuding stars might forge a truce, or even—dare we dream?—some sort of brittle friendship, based on, if nothing else, the acres of common ground they shared: four marriages, difficult daughters, and decades of grappling with shortsighted, abusive studio bosses who built fortunes on their talents, wrung every ounce of work out of them, and threw them away like squeezed lemons at the first signs of age.  (When Baby Jane was first pitched to him, Jack Warner—who had 15 years on Bette and 12 on Joan—sneered, “No one will pay to see those two old broads act.”)

But circumstances conspired against them—in the form of powerful gossip mavens like Hedda Hopper (Judy Davis) and even their own director, who feared a Bette-Joan alliance could blunt his power on the set. A feud, on the other hand, could spark their performances and generate buzz for a film he had little confidence in.

“Aldrich was definitely complicit, but he was also a victim of forces as well,” said Molina. “He was reluctantly drawn into stoking the fires of that feud.  He was morally a complex man, I think that’s a polite way to put it… but he was also an unloved child in Hollywood. That scene where he asks Jack Warner, ‘Do you think I’m capable of being great?’ and he’s told, very blandly, ‘No’… it’s the question we all want to ask and we all fear the answer. So he was a victim but he was also complicit.”

“They were all pawns in one big confusing rat race,” added Catherine Zeta Jones (Olivia de Havilland). “You have all that fragility put onto the set, like a whole bunch of thoroughbreds, and Jack Warner is the jockey deciding which one to favor.”

Happily, the Feud set was much less fraught than Baby Jane‘s. “The atmosphere was the antithesis of what the story was about,” Molina laughed. “It was very relaxed. There’s an old saying among athletes—I’m not saying I’m an athlete in any way, but I’ve heard them say it!—that you get better when you work with the best, with people who have something to teach you. When we first started, I was petrified—with me it always starts out 50 percent excitement and 50 percent dread—but there was an effortlessness about this.”

Murphy credits much of the happy set to the fact that half the directors and many of the writers and other offscreen talent were women—a much higher quotient than the usual (criminally small) ratio. “Much less ego and drama!” he laughed.

“When I did The People Vs. O.J. Simpson, the woman who was supposed to direct the Marcia Clark episode got sick, and I stepped in for her,” he recalled. “And I wasn’t really happy with the results. And I thought, ‘Why didn’t I have nineteen women in my Rolodex I could have called to direct that?’ Now I make a point of hiring as many women as possible.”

When work on Feud began, the long slog of election season was nearing an end—and so, many hoped, was the daily bruising of one sleazy Trump outrage after the next. “It looked like Hillary was going to be our next President, and then about halfway through filming, we got what we got,” Murphy said. “And it was such a wake-up call for me. At first, this series felt a little bit like a time capsule to me… like, aren’t we past all this now—the misogyny, the sexism? And then it was like, no, it’s not over. And I could feel the women on the set getting madder and madder at the outcome and at what was already unfolding.”

But if Murphy and company couldn’t give the country a happy ending, they could give Bette and Joan one—sort of. (Warning: The next paragraph is a mild spoiler.)

In the finale, a gravely ill Joan dreams she hears laughter in the living room. She gets out of bed and moves slowly, warily toward the source… and sees Warner and Hopper knocking back a few at the card table. Soon Bette arrives, and after a little while, it’s just the two of them. And they say what we’ve always wanted them to say. That they wish they’d been kinder. Less self-protective. They wish they’d gotten it right. “But, it’s not too late!” Joan says, reaching across the table. “We can start now!” And Bette, a bit startled, smiles and nods. With that, Mamacita (yes, Jackie Hoffman’s back!) gently wakes her frail charge, wraps her arms around her and shepherds her back to bed.

“I felt like I wanted to give them, and the fans, that closure,” said Murphy. “That photograph, when they started filming Baby Jane, where they’re sitting and chatting—what if it had stayed like that?”

“When I first came out to Hollywood, I interviewed Bette and she told me, off the record, how she really regretted that she and Joan didn’t somehow work things out,” he added. “People conspired against their becoming friends, and there were also romantic entanglements and rivalries… 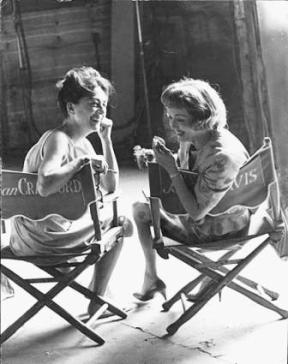 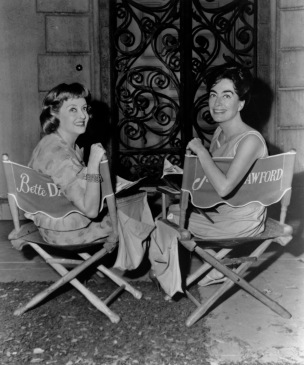 “All of the older actors I’ve interviewed, at the end, they were all talking about that kind of regret,” he said. “If you love someone, tell them. If you’ve hurt someone, make it up to them. People you love, people you’ve fought with, if only you could sit with them and say I’m sorry, I screwed up… okay now I’m getting choked up.”

Even more so when he revealed he dedicated this series to his grandmother. “She raised me, and she reminded me so much of Bette Davis, and I would watch her movies and feel her around me,” he remembered. “So in a way I’m reconnecting with her. That’s why I put that line in the last episode, when Pauline is talking about how older people become forgotten, and she tells the young guy who’s interviewing her, ‘Call your grandmother.'” 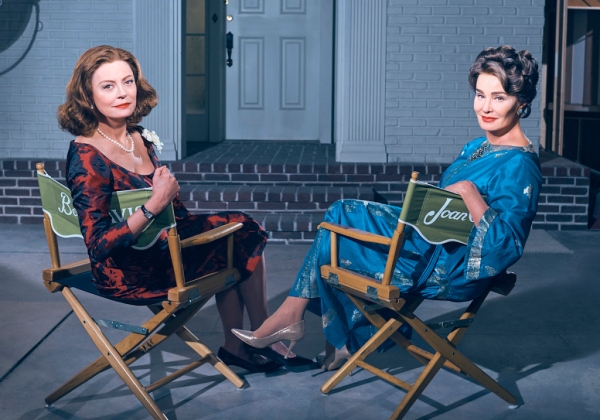 You do the same, if you’re lucky enough to have one. Or call someone you’ve fallen out with, and make it right. Bette and Joan would be proud of you.

Can’t get enough of Bette and Joan? Read about why they should have been friends (written years before Feud!). And about Bette’s other feud—with dogs; her fabulous fundraiser for homeless pets, which drew half of Hollywood; and her surprisingly honest pitch for war bonds! And read about how Joan stepped in for her fallen friend, Carole Lombard; her hilarious turn in Torch Song; and the advice she doles out lavishly in her book, some of which is oddly practical, and some of which is just odd…

Photo credit for shots from the stage: Alejandro Kiesel.