The George Sanders Touch: Even More Fabulous When He Sings

Need a little warmth to soothe you through those chilly nights? Wrap yourself in The George Sanders Touch….. Songs for the Lovely Lady.

He had me at the over-long ellipses… 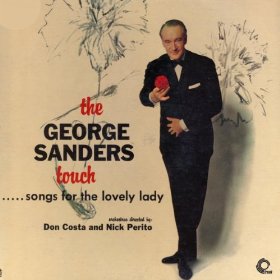 And you needn’t be content just to gaze at the cover of this hard-to-find album, where a slightly sleepy George, who always wakes up in a dinner jacket, slyly hands you a… carnation. (Can’t you just hear him at the photo shoot? “A single red carnation? Really? For God’s sake I give roses to the lovely lady who delivers my laundry!”)

Every song is right here…

One number simply flows into the next—you don’t even have to get up to turn the album over! (You can also buy this in MP3 format from a number of sources, including Amazon UK, but then you don’t get the fabulous visual of George.)

“To the millions of motion picture fans around the world, George Sanders exemplifies nothing so much as the ‘beloved scoundrel’… to his intimates, however, Mr. Sanders represents a titan of talent, being equally at home at the keyboard of a piano, a multi-lingual diplomatic gathering or the Olympics,” gushes Natt Hale in the liner notes. Suddenly I picture George in his tennis whites, tickling out a bit of Gershwin on the ivories while ironing out Cold War tensions with Khrushchev. Which actually doesn’t seem all that implausible.

“During the course of his wanderings, George mastered a number of languages and learned to play the piano, guitar and saxophone,” Hale goes on. “With his background in world travel, it would be somewhat surprising if the erudite Mr. Sanders did not gain an uncanny insight into the customs, the heterogeneous habits and the emotions of many people. He is, therefore, a true cosmopolite, and this is the keynote of The George Sanders Touch. It is a worldly touch—a gentle caress one moment, a vise-like grasp in the next…”

Mercifully, George seems to have left his vise at home for this one and gone straight for the gentle clinches of comfy standards: Try a Little Tenderness, They Didn’t Believe Me, September Song, As Time Goes By, Something to Remember You Buy, If You Were the Only Girl in the World, The Very Thought of You, Around the World, Wonderful One, More Than You Know and I’ll See You in My Dreams. There’s even a sweet song he wrote himself, Such Is My Love, captured here with some gorgeous George photos:

The whole thing is a bit dated, but in a good way. The second time through the album, I closed my eyes, let it wash over me—okay, caress me—and felt like I was right back there in 1958, listening on one of those big ol’ radios that seem more like furniture. Then I fell asleep. But I mean that as a compliment. I’ve listened dozens of times since, and even when I stay awake, I feel like I’ve had a good nap afterward. A nap with George. A girl could do worse.

On a couple of numbers, The Very Thought of You and Something to Remember You By, his velvety voice slinks in with kind of a deep-throated hum that’s a cross between Bing Crosby and really bad gas. It’s like having George Sanders sneak up over your shoulder and kiss your neck. After a really heavy meal. Sometimes when he goes very low, it sounds like he’s got a little indigestion going on, like maybe he’s trying to bring something up. But in a really elegant, charming way. 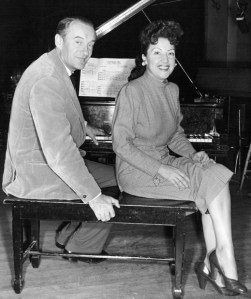 George’s fabulous bass-baritone can also be savored in several films, including Jupiter’s Darling, Call Me Madam (where he knocks the cover off Marrying for Love, giving us a taste of the ballads to come) and The Jungle Book, where he voiced the villainous tiger, Shere Khan.

And in 1949, he fought hard for—and won—the chance to play Emile de Becque in the Broadway production of South Pacific when Ezio Pinza left the show. But our George was always a complicated fellow, a mass of contradictions—and almost as soon as he signed the contract, he was seized with a hideous attack of nerves and had to wriggle out of it.

If you’re as achingly curious as I am about what nearly was ours, here he is singing This Nearly Was Mine…

…and Some Enchanted Evening (both of which can be found on So Rare, Vol. 4: A Selection by Barry Humphries of his Favorite Gramophone Records).

It’s no surprise, given his stage jitters, that he reportedly turned down an even more audacious assignment a few years later. According to his close friend Brian Aherne, in the early 1950s, after hearing Sanders perform several arias on Tallulah Bankhead’s radio show and elsewhere, the manager of the San Francisco Opera Company offered him the role of Scarpia in an upcoming production of Tosca. George told him thanks anyway, but he didn’t want to be an opera star…

In 1967, he seemed ready to give the stage another go, signing on to play Sheridan Whiteside in Sherry!, a musical adaptation of The Man Who Came to Dinner. But he bowed out when his wife, Benita Hume, was diagnosed with bone cancer, which claimed her life later that year.

But while stage success eluded him, he left us with this album. And the whole thing is right here on this page. So go ahead. Hit the Play button, close your eyes, and curl up with George. You can thank me later.