The Real HORROR OF PARTY BEACH Is the Actual Movie

Cruisin’ down the highway to the beat of those groovy tom-toms are Hank (James Franciscus wannabe John Scott) and Tina (Marilyn Clarke), who may be the most mismatched couple since Ethel Merman and Ernest Borgnine.

When they arrive at the beach, Hank warns his booze-swilling girlfriend that she needs to grow up. “Times have changed—we’re not a bunch of kids anymore!” the roughly 35-year-old college student lectures Tina, who’s clearly a drunken ho-bag—so she might as well have “Monster’s First Victim” tattooed on her forehead. 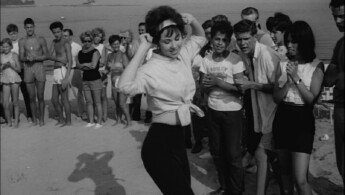 “You go your way and I’ll go mine—we’ll see who gets the most out of life!” she slurs defiantly. “Oh brother you ain’t seen livin’ till you’ve seen Tina swim!” And off she flounces to the beach party, straight into the pasty arms of one of the “toughs” from the local motorcycle gang. This is where the action really begins! Tina’s nonstop butt-waggling incites a rumble between Hank’s crowd and the vicious gang, who apparently travel with their own choreographer—at one point a guy actually somersaults off another guy’s chest toward his intended prey. (To play the villains, producer/director Del Tenney cast a real-life biker gang from—wait for it—Riverside, Connecticut.) 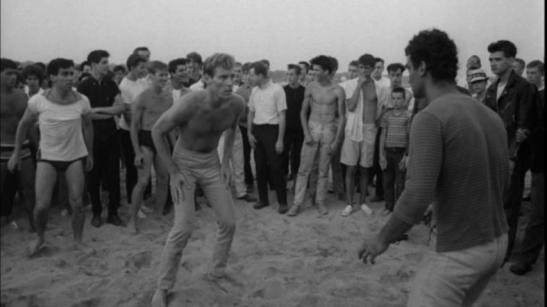 Watching forlornly from the sidelines is Elaine (Alice Lyon), the wholesome girl who’s secretly in love with Hank. Elaine—who we know is a good girl because her idea of beachwear is a sleeveless turtleneck—assures Hank that Tina will come back because “she must realize what she has in you!” But you know she’s secretly hoping that Tina will be mauled and killed by a giant radioactive lizard. And while most of us never get to see that fantasy about our romantic rivals actually realized, Elaine is in luck! Because suddenly we cut to a guy who looks vaguely like Satan, casually tossing barrels of nuclear waste off a cargo ship. What could possibly go wrong?!?

Now here’s where the movie really paid off for me: As an English major, I took as few science classes as humanly possible—but this one scene filled in so many gaps in my education. I had no idea, for instance, that when nuclear gunk oozes out of a container in the ocean, it immediately gloms onto whatever human skull happens to be lying around just offshore. (Nice town ya got there, people!) It will then form an eye, then a head, then a mouth full of wieners, and finally an entire amphibious body—emerging from the water to kill the first hussy it can lay its slimy fins on.

Poor Tina. It was her tough luck to be The Whore of Party Beach. And no sooner does she sun herself on a giant rock, shaking the sea spray from her hair and thrusting her pointy bikini top upward, than the monster emerges from the surf. Now most of us would jump back into the water and swim like hell—but not our Tina! She covers her mouth in horror, screams, and just… kinda… backs up a little. Does that sort of lameness sound strikingly familiar? Like something you’ve seen in just about every cheesy horror movie ever? Well, when it comes to racking up the clichés, this is “The Little Movie That Could”:

After making quick work of Tina, the monster multiplies just in time to bump off literally every guest at a teen pajama party. When last seen, they’re swaying and strumming to the creaky old folk tune The Wagoner’s Lad—making you wish the hulking aquatic beasts would just get a move-on already. “How hard is the fortune of all womankind,” the girls croon, before finding out just how hard. Especially when you don’t, you know, just jump out the window when monsters come through the door.

Luckily for her, Elaine skipped what was shaping up as The Worst Pajama Party Ever even before the monsters arrived. She was home feeling guilty about lusting for Hank so soon after Tina being eaten and all. “I have such feelings about him!” she confides to her father, Dr. Gavin (Allan Laurel). Because there’s nothing a teenage girl enjoys more than discussing her most intimate romantic yearnings with her Dad. But he’s got bigger things on his mind: as the community’s leading doctor/scientist/something vaguely technical, he’s got to figure out how to kill the monsters before they devour the entire slow-moving town.

The family’s African-American maid, Eulabelle (Eulabelle Moore), who was flown in directly from the Department of Hideously Offensive Ethnic Stereotypes, has her own theory: “It’s the voodoo, that’s what it is! I’m double-lockin’ and triple-lockin’! Ain’t no monster gonna get in here tonight!”

As is often the case in real life, shopping proves to be the monsters’ downfall, when one of them smashes a store window to grab a mannequin and loses an arm in the process. After he gets hold of the loose limb, Dr. Gavin convenes a high-level meeting of police and biologists in his unfinished basement. But before they can crack the case, Eulabelle barges in. “Them zombies, they comin’ at me tonight—I just know they will!” she cries, scrambling her sentence tenses like nobody’s business. Then, seeing the monster arm, she flails wildly—knocking over a glass of highly volatile, explosive sodium, which for some reason was perched casually on the edge of the table. It immediately dissolves the limb—Eulabelle has saved the day! (And if there were any justice, her reward would be a one-way ticket out of this movie.)

After a bit more theorizing and dithering—they seem to have forgotten they’ve already found the answer—Dr. Gavin sends Hank on an intrepid search for a massive quantity of sodium. After a gripping scene where he rifles through the phonebook, he eventually finds a huge supply in Manhattan, which is apparently closed on Sunday, giving our young hero a chance to motor lazily around the empty streets from uptown to Washington Square. I mean really, what’s the hurry? Hank makes it home just in time to rescue Elaine—who has skillfully managed to wedge her ankle between two rocks at the town quarry—from being the monsters’ last victim. The whole scene has kind of a Day for Night quality—not because it in any way resembles the Truffaut classic, but because the light changes from day to night to day to night again over the course of about 30 seconds.

Finally, in one of the creepiest endings this side of Tod Browning, Hank drops by to check on Elaine the next morning, and a grinning Eulabelle takes him straight up to her bedroom, where they make out in a blonde-people-in-the-’50s kind of way.

Stephen King has affectionately called The Horror of Party Beach “an abysmal little wet fart of a film,” marveling at how Del Tenney tried to capitalize on a host of popular movie themes—beach parties, monsters and radioactivity—without making the slightest attempt to meld them in any cohesive way. And it’s true: he pretty much just plopped a bunch of genres into the Veg-O-Matic and didn’t much care what came out the other end.

Tenney shot the film on Long Island in three weeks during the spring of 1964, with a budget of $60,000. He sprang for two monster suits, but when the rubbery fabric dried, one was too small for the stuntman, so the 16-year-old son of a production assistant played one of the monsters. (Shades of Ed Wood Jr. hiring his wife’s chiropractor to step in for Bela Lugosi in Plan 9 from Outer Space.) And in the film’s one and only nod to Hitchcock, chocolate syrup doubled for blood.

Tenney also stole a page (but sadly, nothing else) from William Castle: Before taking their seats, moviegoers had to sign a “Fright Release,” absolving the theater of responsibility if the film was so terrifying that it killed them. 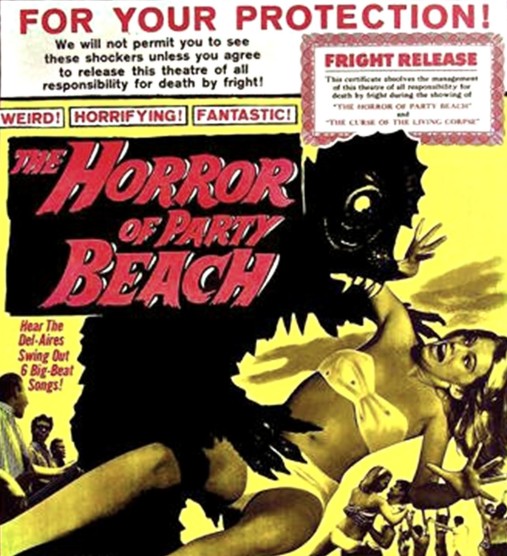 Mercifully, all the actors promptly disappeared after this film—and one kind of disappeared during it. Alice Lyon, who played Elaine, was dubbed for the entire movie—and if the maddeningly hammy voiceover was an improvement, her actual voice must have made the paint peel. When she made this film, Lyon, the wealthy daughter of a diplomat, was married to Hugh Auchincloss III, the stepbrother of Jacqueline Kennedy Onassis. But perhaps even more shocking than the fact that someone appeared in this thing without needing the money is that the Del-Aires, whose white-bread whines pierce the salty beach air, were a real band. Give them credit, though, for being bold enough to open a song with the line “Everybody’s doin’ it, doin’ it, doin’ it…” (No, they’re not doing that—they’re doin’ the Zombie Stomp!)

And finally, in the role (roll?) most people remember best: the monsters’ teeth were played by actual frankfurters.

If you’d like to see this movie, here are Mystery Science Theater‘s takedown of it, and, if you have the stomach to take it straight, the (four-part) version introduced by Sammy Terry, a one-time horror-movie host from Indiana.

This article is part of the Beach Party Blogathon, hosted by two fabulous dames: Ruth from Silver Screenings and Kristina from Speakeasy! To see the other posts, click here!