TINTYPE TUESDAY: Bette Davis Invites You (and Half of Classic Hollywood!) to the Tailwaggers Ball!

Welcome to another edition of TINTYPE TUESDAY! Put on your party clothes and pile in the car, kids—we’re goin’ to a ball!

Bette Davis, who famously doted on her own dogs, was also the Lifetime President of the Tailwaggers Society of Southern California. And in the summer of 1938, she threw a fundraiser at the Beverly Hills Hotel to help the charity group build a shelter/hospital for homeless dogs and a training center for seeing-eye dogs. And when Bette threw a bash, well… 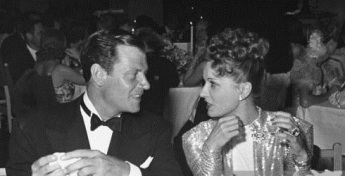 Those who ponied up the $5.50 price of admission included Joel McCrea and Frances Dee (though that’s Lili Damita above), Norma Shearer and James Stewart (who were a semi-discreet item for a while), Henry Fonda, Gary Cooper, Mary Pickford, Jean Parker, Edgar Bergen and Charlie McCarthy, Richard Barthelmess, Lupe Velez and even Bette’s archenemy, Miriam Hopkins.

Shearer donned a chic Egyptian-style wig to hide where her hairline had been shaved for Marie Antoinette. But from Bette’s expression, it looks like Hopkins’ head was the one on the chopping block: 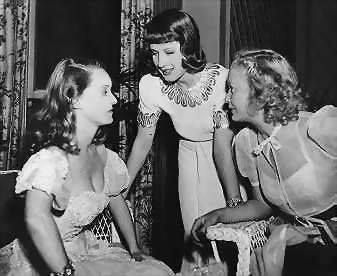 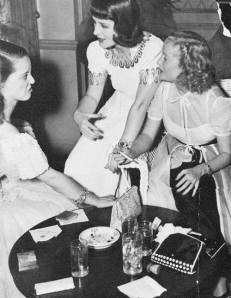 Guest of Honor Howard Hughes lassoed his lanky frame into a tux for the occasion, and the results were downright dashing. “I was wearing a low-cut, pink lace gown and when Howard was introduced to me he looked right into my eyes and not my bosom,” Bette later recalled. “I won’t say there was magic, but there was warmth. He bought scads of raffle tickets from me and asked for a date. He was so debonair and handsome that I was flattered.” The raffle prize, donated by Bergen, was a cocker spaniel puppy named Lord Buffington; Wallace Ford won by a (wet) nose.

Oh and the the place cards? Yeah. Walt Disney dashed those off. 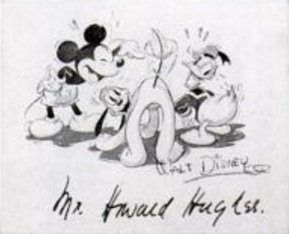 Lively games infused the evening with the air of a children’s party. In one, men picked numbered slips out of one hat and women out of another, and then matched up for a twirl or two around the floor. For the Ball Dance, each man rolled a rubber ball across the room and partnered with the lady it landed in front of. In another event, couples had to dance with an overinflated balloon balanced between them without breaking it. Of all people, the soon-to-be hero of Mr. Smith Goes to Washington tried to cheat, using an unbreakable ball from the previous dance! Lupe saw what you did there, Jimmy… 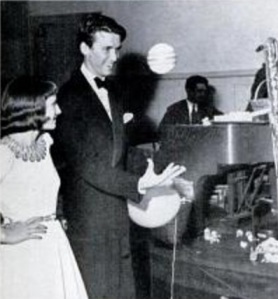 From the intensity of the Musical Chairs matches, you’d have thought the lead in Gone with the Wind was at stake! Veteran star Pickford put ingenue Parker to shame, while Barthelmess, who squired his daughter Ann to the ball, walked (sat?) off with the trophy in the men’s division. 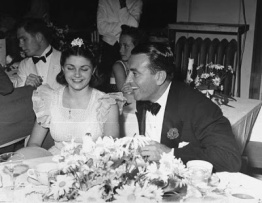 By the time the stars went home, slightly bruised but unbowed, they’d raised thousands of dollars for a fabulous cause! And speaking of happy endings… for this ball, Bette was properly dressed as she waltzed with her Jezebel leading man.