STREAMING SATURDAY! Stanwyck Is a Stripper Turned Sleuth in LADY OF BURLESQUE

Welcome to another edition of Streaming Saturdays, where we embed a free, fun movie for you to watch right here every week!

Ah, Thanksgiving weekend—full of food, family and folksy fare. With that I give you… Lady of Burlesque! 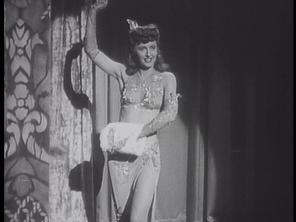 This little confection was the last of five films pairing Barbara Stanwyck with one of her favorite directors, William Wellman. It was based on Gypsy Rose Lee’s novel The G-String Murders, which was ghost-written by Craig Rice, sometimes called the Dorothy Parker of detective novels—whose book sales once rivaled Agatha Christie’s. Oh and it’s probably the only film where Edith Head’s fabulous frocks and fripperies were merrily flung to the floor from the opening scene to the closing credits.

When two striptease dancers in her burlesque troupe are murdered, headliner Dixie Daisy (Stanwyck) becomes the prime suspect—so of course, she has to solve the crime just to save herself from the hoosegow. (I hate when that happens!) Helping her in the hunt are comic Biff Brannigan (Michael O’Shea) and her best pal, fellow stripper Gee Gee (Iris Adrian). While weak-link O’Shea is Dixie’s alleged love interest, the really snappy chemistry is between Stanwyck and the hilarious Adrian (who went on to enliven any number of Disney films, including The Love Bug, Freaky Friday,  The Shaggy D.A., and The Apple Dumpling Gang). 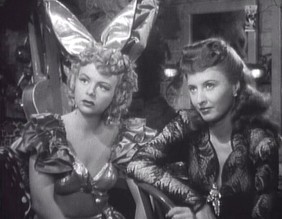 At first glance, it may be hard to see what drew Stanwyck or Wellman to this little backstage bonbon. She was fresh off top-drawer fare like The Lady Eve, Meet John Doe and Ball of Fire. And he’d just done The Ox-Bow Incident, which is practically the Mount Rushmore of westerns. But that stop-and-start shoot stretched over three grueling years, and the director was ready to lighten up a little.

Stanwyck’s motives were much more personal: burlesque had been her ticket out of hell. When little Ruby Stevens was just four, her mother died of complications of a miscarriage after a drunk knocked her off a moving streetcar. Less than a month later, her father fled their Brooklyn tenement to hop a freighter and work on the Panama Canal, never to return. That left Ruby and her brother Byron shuttling between foster homes and the tender but unsteady care of their sister, Mildred, who was only five years older than Ruby.

When Mildred became a chorus girl, Ruby eagerly tagged along. And shortly before her 16th birthday, after just a couple of years playing mostly Z-list gigs, she graduated to the Ziegfeld Follies. “I just wanted to survive and eat and have a nice coat,” Stanwyck once recalled.

In 1927, at age 20, Stanwyck conquered Broadway, landing her first lead in a smash called Burlesque, which sent Hollywood producers scrambling to her stage door.

Not surprising, then, that she brings more than a touch of wistful vulnerability to the part of Dixie Daisy, which could easily have turned brittle in lesser hands.

She even does her own singing in this one, suggestively tossing off Sammy Cahn’s Take It Off the E-String, Play It on the G-String as she bumps and grinds for a raucous audience. Her voice isn’t great, but it’s perfect. And dubbing her over with someone more polished would have been like pouring milk of magnesia over bourbon. (Lady of Burlesque was actually nominated for an Oscar for its Arthur Lange score—losing to, of all things, The Song of Bernadette.)

Stanwyck’s friend Oscar Levant, who’d known her since her chorus girl days, once said, “She was always wary of sophisticates and phonies.” And she never forgot where she came from. In a fabulous bit of irony, just a year after she paid loving tribute to her hardscrabble roots in Lady of Burlesque, Stanwyck became the highest-paid woman in America.