Hollywood Gets Drunk on Itself in SOULS FOR SALE

In the early 1920s, Hollywood was in for a good spanking. And not the fun kind.

Director William Desmond Taylor had been murdered. Wallace Reid, known as “the screen’s most perfect lover,” was lost to the embrace of morphine. And Roscoe “Fatty” Arbuckle had endured three sordid trials before finally being cleared of murder, but his reputation and the industry’s took a brutal beating in the process.

The tongue-clucking among church groups, women’s auxiliaries, and various legions of decency was growing downright deafening, and the studios were running out of ideas for damage control. Until they hit upon the most obvious one: a movie.

Enter Souls for Sale. This wildly lavish apologia for all things Hollywood started life as a novel by Rupert Hughes (uncle of Howard), who produced and directed his own adaptation for the screen in 1923.

Our story—and what a story it is!—begins innocently enough: A new bride, Remember “Mem” Steddon (Eleanor Boardman), is wending west on a gently rocking train with her husband, Owen Scudder (Lew Cody), by her side. What could be more charming? But even before the rice is out of her hair, she’s having second thoughts, as the title card bleats:

“A SUDDEN REVULSION SEIZED HER. THE LOVER WHO HAD SWEPT HER OFF HER FEET IN A WHIRLWIND COURTSHIP TERRIFIED HER AS A HUSBAND.” 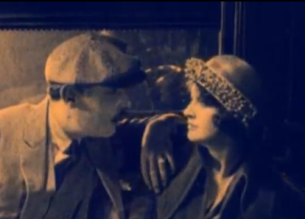 When her oily new mate leans in and kisses her hand, pressing his pencil-thin mustache against her trembling fingers, she feels downright violated. And so, kinda, do we.

Minutes later, when Mem is left alone and the train slows up a little, she climbs over the railing and leaps off into the night. But now what? She’s stranded in the middle of a dark, cold desert…

Ah, but as the dawn breaks, what’s that off in the distance? Why, it’s a sheik cresting over the hill on his camel! It’s literally Hollywood riding to the rescue!

The shiek, as it turns out, is matinee idol Tom Holby (Frank Mayo), who’s shooting his latest over-the-top adventure film nearby. He bundles Mem onto his mount and carries her back to the set on the other side of the hill. Eventually, she follows the troupe back to Hollywood.

And just like that… Mem breaks into the movies! And all it took was marrying a creep and jumping off a moving train!

Thus begins Mem’s (and our) whirlwind tour of Tinseltown. We see Erich Von Stroheim directing Jean Hersholt in Greed. Charlie Chaplin, who was working on A Woman of Paris at the time, setting up a scene (or perhaps pretending to). Frank Niblo shooting The Famous Mr. Fair. Marshall Neilan filming The Eternal Three. (The latter two are considered lost films, so this is likely the only glimpse we’ll ever have of them.) Oh and who’s that in the commissary?  Why, it’s ZaSu Pitts! 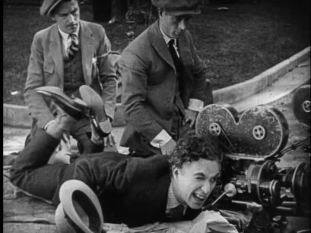 Mem’s first screen test, though, is awful; her “clowning” drives everyone to near tears. But in a scene that became a Hollywood staple—I’m lookin’ at you, Warner Baxter in 42nd Street—director Frank Claymore (Richard Dix) seizes her by the shoulders and swears, “I’ll make you an actress if I have to break your heart and every bone in your body!”

And by God, he does! Make her an actress, that is. Then, when a monstrously large lamp comes crashing down on the cranium of the studio’s biggest star (Mae Busch), Mem moves to center stage. 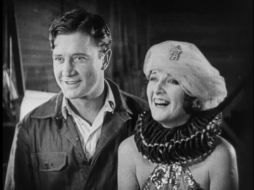 In the meantime, we’ve learned a thing or two about the scoundrel Mem married and fled from. It turns out her instincts were eerily on the mark: Scudder’s a Bluebeard who woos and weds women, then insures and kills them. The cops capture him, but he escapes—and soon finds another trusting victim (Dale Fuller). This one, a lonely spinster, is much more receptive to his advances: when he kisses her hand, she rolls her eyes in such rapture you half-expect her to light a cigarette afterward. She’s lucky enough to be merely fleeced and left alive.

When next we see our villian, he’s after bigger game in… Egypt! (The boy gets around.) When he takes his latest mark to the movies, who should appear on screen but The Wife Who Got Away! And this is where the action really begins… culminating in a spectacular circus fire scene, complete with dramatic rescues, noble self-sacrifice, and of course, romance. But I’ll say no more; you have to see it all, and feel it all, for yourself.

Souls for Sale celebrates Hollywood’s cinematic excesses even as it sends them up. But whatever their foibles may be, these noble kids are doing it all for you!

“FROM THE GIGANTIC LOOMS OF THE STUDIOS, THOUSANDS OF SPOOLS OF ROMANCE ARE SPUN TO WARM THE HEARTS AND BRIGHTEN THE LIVES OF THE BILLIONS.”

A quick check reveals that the world population in 1923 was roughly 1.94 billion, so apparently those looms were so magical, they were warming the hearts of people who weren’t even born yet. To hear Rupert Hughes tell it, movie folks were three or four steps up from missionaries and medics. And while they liked a little good clean fun, moderation was the watchword:

“STARS DANCE UNTIL THE HEATHENISH HOUR OF 11:30 UNLESS THEY ARE TOO TIRED TO STAY AWAKE THAT LONG.”

Yes, kids, everything you’ve ever heard about the stars whooping it up till all hours—the booze, the sex, the drugs—it’s all a damn dirty lie! Because:

“HOWEVER GORGEOUS OR TROUBLED, THE MOVIE FOLK MUST RISE EARLY AND WORK LATE AND FACTORY HARD.”

Honestly, you half-expect to hear Sam Cooke singing, “That’s the sound of the men working on the boom… mi-i-i-ke…”

Perhaps the film’s most ironic ambassador for Hollywood wholesomeness is Barbara LaMarr, who plays Leva Lamaire, a Theda Bara-style diva with a heart of gold. Dubbed “The Girl Who Is Too Beautiful” by columnist Adela Rogers St. John, LaMarr was married and divorced five times, succumbing to nephritis and tuberculosis complicated by drug and alcohol abuse at 29.

Souls for Sale was the spirited Boardman’s first leading role after being discovered in Goldwyn Pictures’ “New Faces of 1921” contest; she went on to star in films such as The Circle, Bardelys the Magnificent, and husband King Vidor’s heartbreaker, The Crowd. We also get an early glimpse not only of Richard Dix but William Haines, whose high-wattage charisma is evident even in a small part. And the overworked casting director is none other than Roy Atwell, who later voiced Doc in Disney’s Snow White and the Seven Dwarfs.

The film owes its luscious look to art director Cedric Gibbons, who was credited with designing the Oscar statuette and went on to be nominated for the award an astonishing 38 times, winning 11.

Once considered lost, Souls for Sale—or most of it anyway—was found in a Czech film archive in 2006. (It seems like about 90% of all rediscovered films are found in vaults somewhere in Eastern Europe.) Restored with its original tinting, reconstructed title cards and a lovely score, the new version premiered on TCM and was released on DVD by Warner Archive in 2009.

A few scenes, such as Mem’s discovery of Scudder’s criminal past, are still missing from the film, but let’s face it, you don’t watch this because you crave logic. You watch it because you love movies. Souls for Sale is a wild, exhilarating glimpse into the early days of filmmaking, when hearts ruled heads and dreams knew no bounds. If it were really possible to jump from your theater seat into a movie, I’d jump into this one.

Much as Mem was rescued by her gallant cinema sheik, prepare to be swept away.