Ginger and Jimmy in VIVACIOUS LADY: The Backstory Was Even Crazier and Sexier Than the Movie

Vivacious Lady may be a fabulous screwball comedy, but what went on behind the scenes was even loopier.

A year before the film was made, Ginger Rogers and director George Stevens had an affair while filming Swing Time, which, as these things tend to do, wrapped when the picture did. Then she started dating an up-and-comer named James Stewart—and pushed for RKO to borrow him from MGM for her next project. Guess who was directing it?

But just two weeks into filming on Vivacious Lady, Stewart got sick—and by the time he was well again, MGM had him booked for Of Human Hearts. So RKO shelved the project until he was available.

Rogers, by the way, was free only because Fred Astaire hankered to do his next picture for Stevens, A Damsel in Distress, without his six-time screen partner. But in a classic case of “careful what you wish for,” he quickly regretted it. After failing to land either Jessie Matthews or Carole Lombard as his leading lady, the studio settled on a 19-year-old newcomer who, it soon became clear, wasn’t up to the job—especially for a notorious taskmaster like Astaire. “[RKO boss] Pandro [Berman] and Freddie came down to the set and said, ‘Can we talk to you? We are very disturbed about Joan Fontaine. We’ve got to make a change… we’ve got to replace her,’” Stevens recalled in his journal.

They suggested that (yikes) Ruby Keeler step in—and what happened next tells you everything you need to know about Stevens, who stood up to his boss and the studio’s biggest male star in defense of a real-life damsel in distress. “I said, ‘If we take this girl out of the picture she’ll probably kill herself,’” he wrote. “They said that was an exaggeration and I said ‘It probably is but I’m going to stay here and you’re not going to do it. You can’t do it. We all made the decision.’ They were right. She was the wrong girl in the wrong spot. But she never knew that they wanted to take her out of the picture, or she would have collapsed.”

While Astaire fumed, his erstwhile dancing partner spent a blissful summer in Big Bear, filming Having Wonderful Time with Douglas Fairbanks Jr. while waiting to work with her current beau and her former lover on Vivacious Lady. (Oh and as an added plot twist, Stevens was called up the mountain to shoot a scene with Rogers and Fairbanks when director Alfred Santell briefly fell ill.)

When Stewart was finally free, Berman seized on the narrow window in his schedule to resume filming. Which left Stevens running all over the lot—working with Rogers on one soundstage, Astaire on another, and Katharine Hepburn, with whom he’d had a fling during Alice Adams, on a third, in Quality Street.

All of which makes the plot of Vivacious Lady—nerdy scientist goes to the big city to rescue a relative from the clutches of a showgirl, falls in love and weds her himself, and brings her home without telling his stuffy family they’re married—seem like pretty tame stuff by comparison. 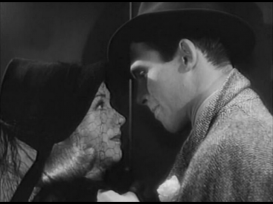 As our story opens, botany professor Peter Morgan (Stewart) has been dispatched from the staid college town of Old Sharon to Manhattan by his frantic family to retrieve his wayward cousin Keith (James Ellison), who’s fallen for a cabaret singer. He tracks him down at the club where she works and tries to talk sense to him, all while fending off the waggling tail feathers of a dancer in the floor show.

Then Peter dutifully calls home to tell his pompous, overbearing father (Charles Coburn) that he’s bagged his prey. (In a scene that could have been shot yesterday, he yells into the phone over the din of the crowd, so wrapped up in his own conversation he’s oblivious to how irritating he is to everyone around him.)

But what’s that lovely cooing sound off in the distance? Why, it’s the siren herself, Francey (Rogers)! Only Peter doesn’t realize that. He only knows he’s being drawn back toward the dance floor, stumbling and clattering over a cooler as he gazes at her—finally nearly collapsing into a chair at Keith’s table. (His cousin, meanwhile, is hiding in the men’s room.)

After her number, Francey drops by the table to look for Keith, and Peter realizes—in that halting, stammering way only Jimmy Stewart can—that this is the girl. She teases him about the commotion he caused (“Say, what were you trying to do—break me up?”), and before long, they’re laughing… and talking… and slipping out into the night together. Leaving poor Keith, who was trying to give Peter the slip, on the other end of the raw deal. (In a small role as the maÎtre d’, Jack Carson dryly delivers the bad news that his cousin and his girl have vamoosed.)

Thus begins a whirlwind New York night of open-air double-decker buses, walks along the water, and eating corn on the cob (!) from a street cart. (When did that stop being a thing? And when is it coming back?) As morning breaks—yes, that’s the milkman on his way!—Peter and Francey circle dizzily back to her front door, but aren’t even ready to say goodnight, let alone goodbye.

“Do you, uh, do you always think things out carefully?” he asks her, practically proposing right there in the doorway.”Well if they’re small things, I never do,” she confides, “but if they’re important things, I never do either…” Hanging on by a thread to what’s left of their senses, they kiss, first softly, then hard, before she dreamily drifts upstairs. Then Peter bolts for the payphone across the street and invites her to breakfast— where, now that a respectable amount of time has passed, he asks her to marry him.

Waiting for the newlyweds back in Old Sharon—oh boy!—are Peter’s father, the president of the college where his son teaches, and his mother (who else but Beulah Bondi, in one of five turns as Stewart’s mom), who’s prone to fainting spells. And oh, yes—his utterly humorless fiancée, Helen (Frances Mercer), who really should see about having that pole removed.

Because he’s a damn good sport, Keith is there too, and even puts Francey up until Peter has a chance to explain everything. This is the rare case where the third wheel isn’t some eminently dumpable stooge—the kind of guy who makes you wonder, “And she was with him why, exactly?” He’s funny and loosey-goosey and altogether a fabulous fallback should Peter weasel out and let Francey down. (How Ellison broke into movies was also pretty nifty: while working at Warner’s film lab, he was offered a screen test—which he developed himself, hated, and promptly hid. But a producer unearthed it and signed him to a contract.)

Of course, breaking the news of the marriage turns out to be a long, arduous process. To make matters worse, Francey and Peter have yet to spend a night together, and their frustration is palpable. (So is the chemistry between Rogers and Stewart. And for a guy with such a wholesome screen rep, no one is better at simmering, unholy lust than Jimmy.) In the meantime, Francey poses as one of Peter’s botany students, convincing exactly no one.

Mr. Morgan knows something’s going on, but has no idea what. All he knows is that his once reliably bland son, who always fell into line before, is suddenly a bit… wobbly. And least happy of all is Helen, who may be a stiff, but she’s no dummy.

Peter’s mother doesn’t much care who Francey is—she’s just happy to have someone she can relax with, who doesn’t have ivy stuck up her… nose. At the college formal, the two unlikely allies bond over where to buy the best stockings as they sneak a smoke in the ladies’ lounge. 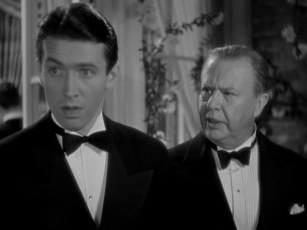 Helen, though, is in no mood to make nice. When she heads out to the veranda to warn Francey to back off, the tension builds deliciously. Finally she asks, “Now are you going to mind your own business or must I really give you a piece of my mind?” Smiling demurely, her rival responds, “Oh I couldn’t take the last piece!”

That tears it: Helen lets loose with the first slap… which leads to a counter-slap… and finally an all-out sequin-and-satin brawl. Harking back to his days with Laurel and Hardy, Stevens stages it to perfection, cutting between close-ups and medium shots, capturing every ounce of outrage amid the hair pulling, kicking and yes, even biting.

(Rogers fought at something of a disadvantage: RKO, which had insured her legs for half a million dollars, insisted they be strapped to boards and padded during the melee.)

The brawl also tells us everything we need to know about these two ladies: Francey is honest and direct, even loosening up like a prizefighter before putting up her dukes. Helen, on the other hand, opts for sneaky maneuvers like a stickpin to the caboose.

You wanna see class struggle? Skip the sociology books and watch these two go at it.

But that’s not even the best number in the film. Because later on, Keith pops home to show Francey a new dance he’s learned called The Big Apple. And who should be there but his aunt… who’s coaxed into cutting the rug with them. Thus giving us the rare opportunity to see Beulah Bondi shake her moneymaker.

And this isn’t one of those tiresome scenes where “grandma does something wacky.” Stevens was a master at using musical numbers to move the story along, and here it’s clear that Mrs. Morgan is sick of this suffocating town, tired of her tyrannical husband, and ready to shake loose. It’s great to see Bondi, who easily holds her own with Rogers and Ellison, break free as more than just somebody’s mother.

In fact everything about this movie is pretty great. Deservedly, and despite all the screwball drama that preceded it, Vivacious Lady turned out to be one of RKO’s biggest hits. Oh and soon after, Rogers and Astaire were reunited for Carefree, bringing the universe back into balance. 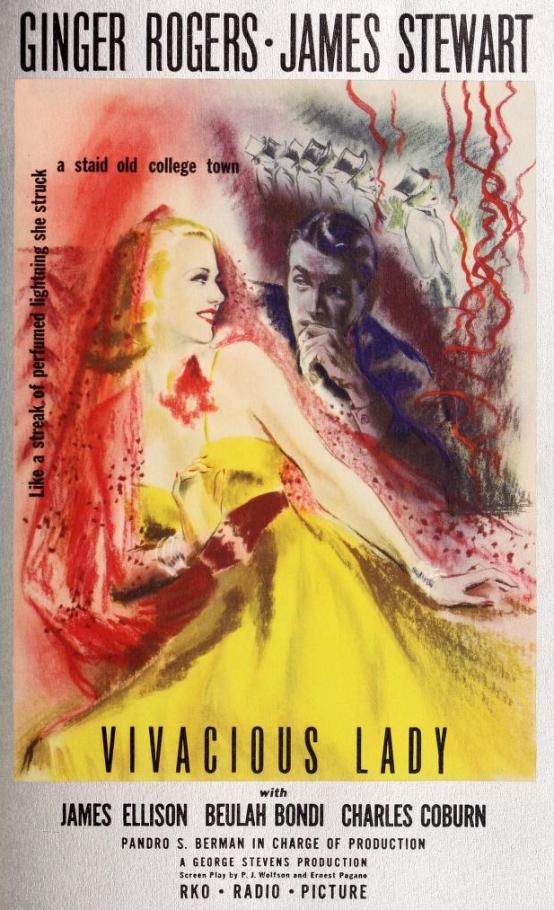