Remembering Billy Chapin, Who Saw Us Through THE NIGHT OF THE HUNTER

More than half a century after shielding his little sister through the most monstrous night of their lives, John Harper left the world on her birthday.

Billy Chapin—who, as John, all but carried The Night of the Hunter on his slight shoulders—died on December 2, the day Sally Jane Bruce, who played Pearl, turned 68. 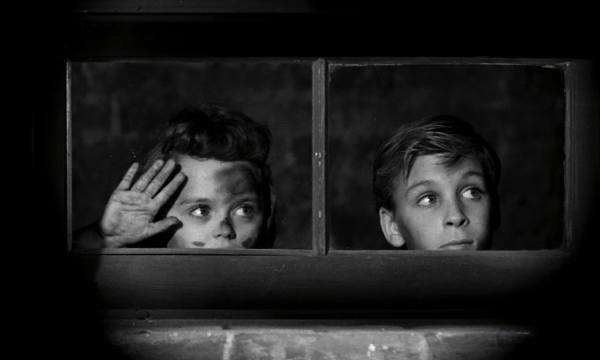 From the moment we meet him, it’s clear John Harper is an old soul, something his father Ben—a robber with a bullet in his shoulder and the law fast on his heels—is counting on. He stuffs $10,000 in stolen cash into Pearl’s doll and entrusts both the girl and the money to her brother:

Ben: Listen to me, son, you gotta swear. Swear means promise. First, swear you’ll take care of little Pearl, guard her with your life, boy. Then swear you won’t never tell where the money’s hid, not even your Mom.
John: Yes Dad.
Ben: Do you understand?
John: Not even her?
Ben: You got common sense. She ain’t. When you grow up, that money’ll belong to you. Now stand up straight, look me in the eye. Raise your right hand. Now swear, “I’ll guard Pearl with my life.”
John: I will guard Pearl with my life.
Ben: And I won’t never tell about the money.
John: And I won’t never tell about the money. 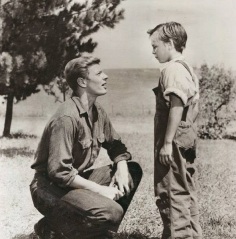 Seconds after he gravely recites his vow, John is suddenly a child again for one brief, awful moment—almost doubling over in agony.as his father is knocked to the ground and dragged away in handcuffs.

But then he sets out to keep his promise, against what turn out to be nightmarish odds.

After Ben is hanged, his former cellmate—a self-styled preacher named Harry Powell (Robert Mitchum)—follows the missing money straight to John’s front door, quickly courting and winning his gullible mother, Willa (Shelley Winters) and his trusting sister—but never John, who realizes he must now try to protect not only Pearl but Willa as well.

Normally you wouldn’t give much for the chances of an 11-year-old boy against a six-foot-one psychopath—or for the chances of a child actor against the outsize Mitchum, in his best (and favorite) role. But even as Mitchum looms over him, swallowing him in his shadow, Chapin holds his own, and the screen. He conveys the deep seriousness of a child forced to grow up, or at least try to, in a matter of minutes, but he’s still so vulnerable it hurts. He pulls you so hard into his terrifying world that even if you’ve seen the film before, you’re knotted up in fear every time you watch it.

At first, Powell tries to cajole the children into confiding in him about the hidden money. He’s so unnervingly persistent that even John—who’s developed more cunning than any child should have to—blurts out more than he ought:

John: You ain’t my Dad! You’ll never be my Dad!
Powell: When we get back, we’re all going to be friends and share our fortunes together, John.
John: (screaming) You think you can make me tell, but I won’t, I won’t, I won’t!

Horrified by the lapse in his defenses, he slaps his hand over his mouth to keep from revealing anything more. But it’s already too late: Powell now knows the money is somewhere in the house—and John knows where it is. 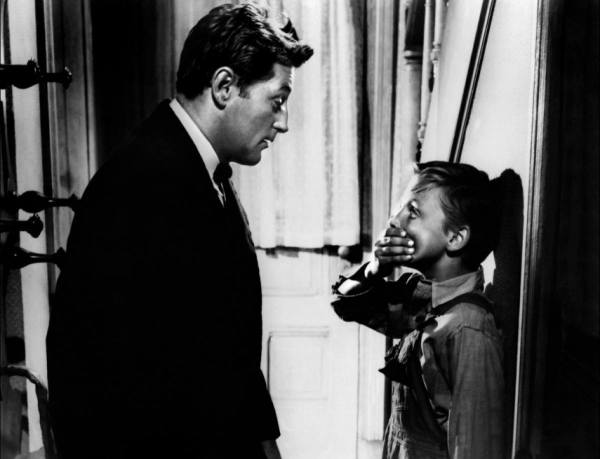 At this point, the hapless Willa is dispensible to her husband. After she disappears under the water, her throat slit wide and her blonde hair swaying like sea grass, John and Pearl are at the preacher’s mercy. And he hasn’t any.

Powell convinces the neighbors that Willa ran off with another man, but John knows better. And when the preacher hauls them to the table for another grilling about the money, John, his jaw set firm, all but wills Pearl to keep her mouth shut. But when she’s badgered to the point of tears, he can’t bear it. Playing for time, he says the money is buried under a stone in the fruit cellar. Powell grabs a candle and marches them downstairs ahead of him—only to discover the floor is solid concrete. Enraged, he throws John across a barrel and holds a switchblade to his throat: “The liar is an abomination before thine eyes!”

Terrified for her brother, Pearl screams, “It’s in my doll, it’s in my doll!” The preacher rears back and laughs, “The doll—why sure, the last place anyone would think to look!” Seizing on the brief distraction, John snuffs out the candle and knocks a shelf of preserves onto Powell’s head. Then he grabs Pearl, who’s clutching her doll, and pulls her up the stairs and out into the night.

In one of the most terrifying odysseys ever set to film, they run for the river, where John hopes to get help from his friend Birdie, who doesn’t trust Powell either. But after stumbling across Willa’s body while fishing, he’s drunk himself into oblivion in the barge house. (Moral of the movie so far: grown-ups are either useless or lethal.) With the preacher in pursuit, John drags out his father’s old skiff, shoves it off the shore and sets out with Pearl for… anywhere, as long as it puts distance between them and their homicidal hunter. And just as he pushes off, Powell plunges into the river, knife raised, letting go an ungodly shriek as his prey flee to the safety of the open water.

The river is their sanctuary, and for a few days they follow the currents, ever farther from what was once home, foraging or begging for food by the water’s edge and sleeping wherever they can, surrounded by nature both ominous and soothing. Some creatures are as vulnerable as they are, others are plotting a kill. 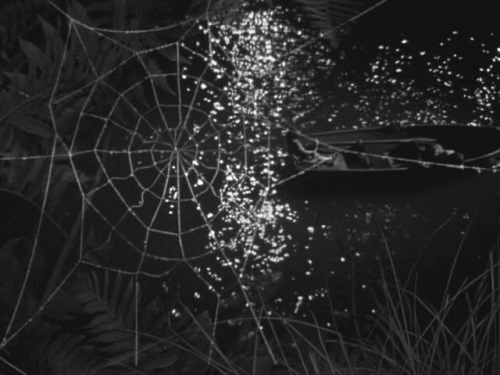 Finally, exhausted and hoping to find a soft place for the restless Pearl to lay her head, John steers the boat to shore, toward an old barn with an open hayloft. But just as he’s about to set his bone-weary body down, he hears the preacher hymn-singin’ in the distance, as the horse he stole lopes lazily along; he can take his time, he’ll catch up with them eventually. And with a mix of horror and heartsick resignation, John half-whispers:

He quickly wakes his sister, bundles her back into the boat, and they return to the river. As the sun rises, their skiff drifts ashore, its young-but-old oarsman barely conscious and his sister fast asleep. They wake to see a wiry old woman hovering over them. “You two youngsters get up here to me this minute! Get on up to my house! Mind me now, I’ll get my switch!” Miss Cooper (Lillian Gish) barks. She’s already got a house full of cast-off children, and now “two more mouths to feed.”

Pearl takes to her immediately, but the battleworn John is still wary, and who can blame him? Still, she’ll turn out to be his savior—no man is a match for a Gish with a gun—and when she dispatches the preacher—who comes to claim “his children”—to the state troopers, John can almost believe he’s home at last. At Christmas, with no money or gift to give, he wraps an apple in a lace doily and shyly hands it to Miss Cooper. “That’s the richest gift a body could have,” she tells him, and he beams back at her. Now John is not only safe, but knows he’s safe. At last he, and we, can breathe. 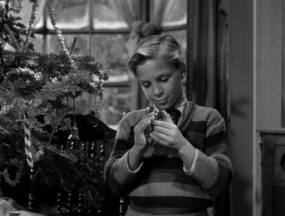 About 10 or so years ago, UCLA devoted a special evening to The Night of the Hunter, including a panel hosted by Preston Neal Jones, author of Heaven & Hell to Play With, an oral history of the film. During the Q&A that followed, an audience member asked if anyone knew where the extraordinary Billy Chapin had disappeared to. Turns out he was in the audience. When Jones pointed him out, he stood briefly, acknowledged the waves of applause, and quickly slid back into his seat while everyone else was still standing, eager to escape the gaze of the crowd, however much affection it held for him. 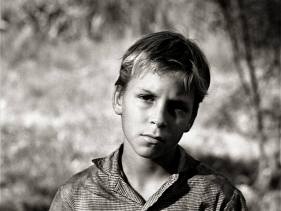 You can only wonder how Chapin felt that night, seeing the boy up there on the screen, brutally robbed of his youth and almost his life. Like John Harper, his childhood was short-circuited, though in somewhat less monstrous fashion. He’d been acting almost since the day he was born—that’s him as the baby girl in Casanova Brown—but made just one more film after The Night of the Hunter, then did some television and fled the business at 15. Scant information is available after that, other than hints at a “troubled”life. He never talked publicly about his work, and in the acknowledgements for his book, Jones said Chapin “gave the project his blessing, although for personal reasons he was unable to participate.”

I hope when he returned home from UCLA that night, in the stillness of his solitude, he was able to realize how much he meant to people. And I wish, like John Harper, he could have found safe harbor. We all need a Miss Cooper. I wish, somewhere in this cold world, Billy Chapin had found his.