After a long hiatus, the Sister Celluloid website is back on a semi-regular basis, which I hope will be even steadier soon.  That includes the return of our Streaming Saturdays feature, where we embed free, fabulous films! So fasten your seatbelts, we’re starting with a doozy…

If you ever run into Alice Faye, for God’s sake don’t mention Fallen Angel. What she thought would be her big dramatic breakthrough turned into a minor breakdown—and pretty much the end of her movie career. 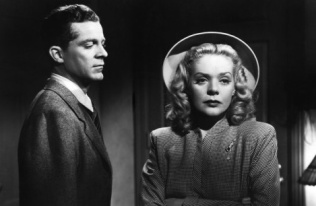 By the mid-1940s, Faye was one of 20th Century Fox’s most bankable leading ladies, thanks to a series of wildly popular musicals—exactly the kind of cotton-candy confection she was now hoping to escape. Lucky for her—or so she thought—Otto Preminger was starting a new film right on the heels of the legendary Laura. Faye pounced on the project, and, hoping she could step in where Gene Tierney left off, wielded her studio clout to land Dana Andrews as her co-star.

But, as it has a way of doing in the world of noir, fate stepped in. And in this case it looked a lot like Linda Darnell.

The shy 22-year-old stunner had already made 18 films, thanks in part to a brutal stage mother who all but frog-marched her onto the Fox lot when she was just 16. Eager to move beyond ingenue roles, she’d just played her first genuine bad girl in Douglas Sirk’s Summer Storm, an adaptation of Chekov’s The Shooting Party. Like Faye, Darnell leapt at the chance to work on a dark new drama.

In fact just about the only one who wasn’t excited about Fallen Angel was Preminger. Salivating over the success of Laura—and honoring the studio creed that nothing succeeds like doing the same thing over and over—Fox chief Darryl F. Zanuck rushed the director into production on another moody mystery. Grudgingly, Preminger reassembled most of his Laura crew, including cinematographer Joseph LaShelle, and reported to work. 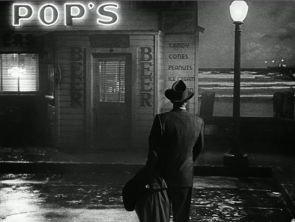 In a gritty departure from the elegantly angst-ridden detective in Laura, Andrews plays Eric Stanton, a luckless drifter who’s stranded in a backwater berg after he’s thrown off the bus to San Francisco because he can’t scrounge up the two-buck fare. In a greasy little dive called Pop’s Eats (where, in giant letters, the word BEER bedecks both sides of the front door), he runs up against the sullen, sultry Stella (Darnell), who’s long on dreams and short on plans or patience.

The two quickly fall in love, but Stella comes with a pricetag: she wants money and a home, and Eric has neither, in spades. So he takes up with a traveling con man, Professor Madley (John Carradine), and goes in search of a mark. That’s where June Mills (Faye), who’s inherited a house and a tidy fortune from her father, comes in. 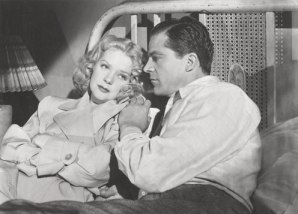 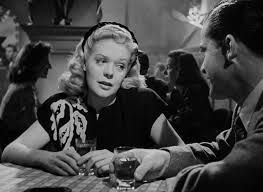 Originally, the film was to focus on Eric and June, and how the love of a good woman saves him from a life of sin <sniffle>. Then Preminger got a gander at the rushes of Darnell and Andrews—and suddenly sin didn’t look like something any man in his right mind would want to be saved from. Either of the two stars alone could generate chemistry with a potted plant, and together, they made everything and everyone else disappear. Including poor Alice Faye.

By the time the director put down his scissors, many of Faye’s best scenes were on the scrap heap and the ill-fated love affair between Eric and Stella had smoldered its way to center stage.

When Faye saw a rough cut of the film, she was so angry she bolted from the screening room and drove off the lot, tossing her dressing-room key to a security guard as she flew past the gate. She returned only once, 17 years later, to play the mother in the plodding remake of State Fair. (Ironically, she’d turned down the much more glamorous role of chanteuse Emily Edwards, eventually played by Vivian Blaine, in the 1945 version, which starred—wait for it—Dana Andrews.)

Little did she know, Darnell wasn’t having much fun either; she later recalled that Preminger was “terrifying” to work with. And by the 1950s, her career was largely over as well. (Much more on her desperately sad life, and tragic death at 41, here.) But she would team once more with Andrews, in the unintentionally hilarious Zero Hour, which was the basis for Airplane!.