TINTYPE TUESDAY: Behind the Scenes of MIRACLE ON 34TH STREET!

Does the current crop of Christmas movies make you yearn to go back to 1947?  I mean even more than you normally do?  Then let’s journey together back to that magical time…

…when the lovely Maureen O’Hara was ready to pretty much punch someone in the face. She’d just flown home to Ireland after back-to-back shoots on The Homestretch and Sinbad the Sailor, and was all set to curl up with a cuppa and relax for a spell. So just imagine her excitement when she was suddenly summoned off the sofa and clear across the ocean to New York to star in a little confection called Miracle on 34th Street.

Luckily for 20th Century Fox, she fell in love with the script the instant she read it.

Which is more than you can say for Darryl F. Zanuck, who didn’t want to make the “corny” film at all. Director George Seaton, who’d thrown his heart into the project, fought back hard—finally wangling a paltry $630,000 budget out of the cynical studio boss in exchange for a promise to direct The Shocking Miss Pilgrim, which Zanuck was willing to pour five times as much money into. (And which we all gather ’round the TV to watch every year! Oh wait…)

For O’Hara, a divorced working mother herself, the part of Doris Walker was an especially good fit, and also a chance to cast her glow on the kind of role rarely seen in films of the 1940s. (The powerful Legion of Decency found the portrayal of divorcées on screen to be “morally objectionable.”) 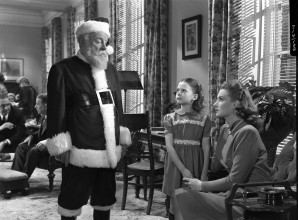 The Academy of Motion Picture Arts and Sciences will present a newly restored print of the Oscar¨-winning Christmas classic ÒMiracle on 34th StreetÓ on Thursday, December 11, at 7:30 p.m. at the Samuel Goldwyn Theater in Beverly Hills. The 35mm print to be screened is from the collection of the Academy Film Archive, courtesy of Twentieth Century Fox, and is presented as part of the AcademyÕs Gold Standard screening series. Pictured: Edmund Gwenn, Natalie Wood, and Maureen O’Hara in a scene from MIRACLE ON 34TH STREET, 1947.

Once the perfect leading lady was on board, the search for Santa was on. The first choice was Cecil Kellaway, who turned down the part but suggested his cousin, Edmund Gwenn. “I’ve never seen an actor more naturally suited for a role,” O’Hara later recalled.

So much so that until she saw him in street clothes at the wrap party, Natalie Wood—who said she’d been “on the cusp of not believing in Santa Claus”—thought her beloved co-star was the real thing. And this was no sheltered, impressionable child: known as “One Take Natalie” for her photographic memory, Wood was whip-smart and had what Seaton called “an instinctive sense of timing and emotion.” And if she felt Gwenn was Santa Claus, who are we to argue? 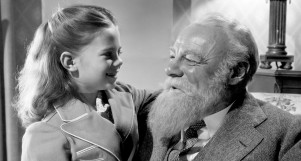 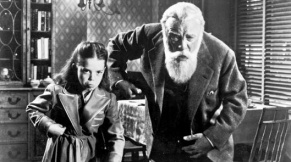 Unbeknownst to the thousands of spectators lining the streets of New York, Gwenn was also Santa Claus at the 1946 Macy’s Thanksgiving Parade, even greeting the crowd from the store’s marquee. To make sure he got ample footage, Seaton set up 14 cameras all along the route. “It was a mad scramble to get all the shots we needed because we only got to do each scene once,” recalled O’Hara. “The parade couldn’t stop because we needed a second take!” 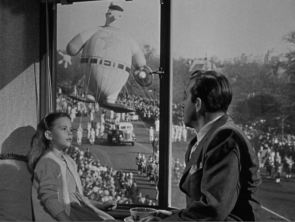 In fact, in an era when soundstages ruled the day, almost the entire film was shot on location—during a winter so bitterly cold that the chill sometimes froze the cameras.”One scene was shot in Port Washington, New York, where a woman let us warm up in her house,” O’Hara later laughed. “The crew put the cameras in front of her living room fireplace to thaw out… finally the cameras defrosted and we were able to finish the scene. Her generosity was one of the miracles in Miracle on 34th Street!”

The closeknit cast also helped to warm things up. “John Payne was a wonderful person to work with,” O’Hara remembered. “And he became one of my dearest friends.”

O’Hara was especially close to her screen daughter: “I played ‘Mom’ to more than forty children during my movie career. But Natalie always held a special place in my heart. She called me ‘Mama Maureen.'”

The scenes in Macy’s were shot after hours, which thrilled the adventurous eight-year-old: “Natalie loved to work at night because she got to say up late. With all the shoppers gone, we walked through the store and examined all the toys and girls’ dresses and shoes,” said O’Hara. “It was a special time for us.”

“Mama Maureen” was also kinder and more lenient than Wood’s own notorious stage mother: “I brought a bag of chocolates for Edmund every day. We hid the candy from Natalie because her mother didn’t want her to have any.

“One day, Edmund got some chocolate all over his white beard, and Natalie spotted it immediately. We let her sneak some, but we made sure her mother never caught us.”

Wood found a special way to thank her movie mother for her much-needed warmth. “At least once a week, she gave me a little ceramic figurine she’d made,” O’Hara remembered. “I took them all down to my home in the Virgin Islands but when Hurricane Hugo hit, they were all literally blown away. I couldn’t find a single one.” 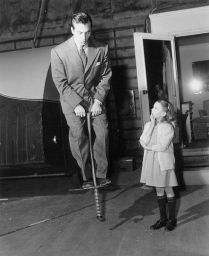 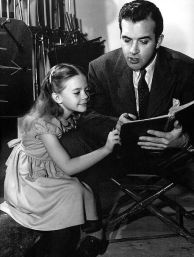 When the movie wrapped, the cast and director were pretty confident audiences would love seeing the film as much as they loved making it. But Zanuck remained unconvinced—and in another stroke of genius, decided to release the film in June, when, he argued, movie attendance was higher. This left the studio scrambling to promote a Christmas film without ever calling it a Christmas film. Which brings us to this head-smackingly odd trailer:

In it, the studio boss, who’s something of an imbecile (did Zanuck see this?), bellows, “What do you make a trailer for? To give the public an idea of what kind of picture to expect!” Then—Irony Alert!—they completely sidestep the fact that this is a Christmas movie. The boss wanders out onto the lot, buttonholing passing stars like Rex Harrison and Anne Baxter for their opinions of the film. They all love it, for wildly different reasons (Peggy Ann Garner calls it groovy!) but no one dares utter the “C” word.

Joining the long list of films that succeeded in spite of studio bosses rather than because of them, Miracle on 34th Street ultimately found its (sandal-clad) audience, recouping its skimpy budget several times over. And along with The Bishop’s Wife, it was one of two Christmas films vying for Best Picture at the 1948 Academy Awards ceremony. Both lost to Gentlemen’s Agreement.

Gwenn fared better, taking home the Oscar for Best Supporting Actor against a brutal field. Literally. Two of his rivals—Richard Widmark in Kiss of Death and Robert Ryan in Crossfire—played noir characters legendary for their viciousness. So the next time you see Tommy Udo push Mrs. Rizzo down that flight of stairs, just remember that ultimately, he was beaten by Santa Claus.

As you can hear in the clip below, the applause that greets his name—or as presenter Baxter would call it a few years later, “waves of love coming over the footlights”—make it clear who the winner will be. “Whew! Now I know there’s a Santa Claus,” Gwenn tells his adoring colleagues. “He’s an elusive little fellow… he turns up in all sorts of places under all sorts of names and disguises. The first time I met him, he told me his name was George Seaton…” And later, his voice breaking, “Thank you, all of you, for making the evening of my life such a happy one.”

And finally, here a few bits of Miracle on 34th Street trivia to toss around the Christmas table:

It seems only fitting to give the final word to Maureen: “I’m so proud to have been part of Miracle on 34th Street.” And we’re so grateful you were. We still miss you, dear lady. And we’ll never forget what you told us:

TINTYPE TUESDAY is a regular feature on Sister Celluloid, with fabulous classic movie pix (and backstory!) to help you make it to Hump Day! For previous editions, just click here—and why not bookmark the page, to make sure you never miss a week?