Cinderella Finally Settles a Few Scores in THE GLASS SLIPPER

In just about every version of Cinderella, our heroine reacts the same way to the vicious abuse heaped upon her by her evil step-family: She hides away in her little corner. And she dreams. And she aches. And she yearns.

But here’s the thing: why doesn’t she ever get really mad?

Enter Leslie Caron, in The Glass Slipper. In her memoir, Thank Heaven, Caron confides that when she made the film in 1955, “I was, like everyone else in Hollywood, under the influence of Marlon Brando’s performance in On the Waterfront… I used to see it several times a week—I bought my ticket, with the rest of America, at least twenty times. Yes, I admit it, ridiculous as it may be, my inspiration for Cinderella was… Marlon Brando.”

Billed as “MGM’s Musical Salute to Springtime,” the movie is more March than May, honing the old fairy tale to a pretty sharp edge. When we first meet Ella, she’s struggling desperately to mix in with a small clique of snooty townsfolk, who reject the smudge-nosed waif in the dirty dress, taunting her with cries of “Cinder-Ella!” Clearly wounded, she lashes out rather than retreating—working up such a rebellious head of steam you half-expect her to burst into a chorus of “When you’re a Waif, you’re a Waif all the way…”

This girl will not go quietly. But the narrator (Walter Pidgeon) warns, “The little spirit is still defiant and defensive and still unbroken, but give them time, and they will break it…” This is not a gossamer creature who can blithely glide above adversity. This is a real human being who can bear only so much pain before she’ll collapse under the weight of it.

Meanwhile at the palace, Prince Charles (Michael Wilding) is explaining to his friend Kovin (Keenan Wynn) why he’s always such a soft touch. It seems that once, years ago, his carriage was stranded in the middle of the town, when suddenly out of a doorway ran “a little girl of about five, crying in a sort of tragic frenzy… I don’t know what it was all about… one thing I remember: she had great, agonized, rebellious eyes, the most tragic face I ever saw… I’d never known sorrow, not really, but ever since then I felt like I’ve had some knowledge of what it was like. And ever since then I find it almost impossible to resist a weeping woman!”

Of course you know where all this is going. But oh, the way it gets there…

For starters, Ella’s evil stepsisters aren’t the hags they’re usually depicted as. In another cold blast of reality—that life sometimes well and truly sucks—both of them are gorgeous. The narrator pegs Birdina (Amanda Blake) as “beautiful as a rose and poisonous as a toadstool” and Serafina (Linda Daniels) as “effortlessly alluring and cold as a cobra.” Even their mother, the Widow Sonder (Elsa Lanchester), isn’t too tough on the eyes. 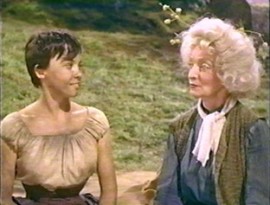 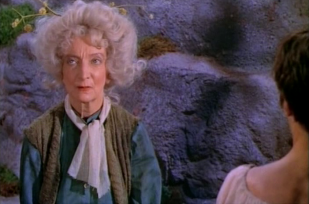 Ella seeks sanctuary from these shrews in a soft, green meadow by a gentle little brook, “her home place, a place all by itself…” And one day, who should pop along but Mrs. Toquet (Estelle Winwood), the town eccentric by day and a bit of a klepto by night. These outcasts see in each other a kindred soul, and the older woman senses how much Ella needs to be loved and looked after. “We’ll talk and tell each other things and we’ll be friends!” Ella all but pleads. Mrs. Toquet looks at her so lovingly, you almost don’t care if she ever finds her prince. At least she’s found a mother—or in this case, a highly unorthodox fairy godmother.

They agree to meet again the next day, but when Ella arrives, her little spot is already taken by Charles and Kovin. “This is my place!” she spits at them. In the rare moment he’s not being shooed away, the prince manages to squeeze out a whopping lie, telling Ella that he works in the palace as a cook. She fires back that someday she’ll live in the palace—and when he responds with amusement, she takes it as ridicule. She beats her fists against him, sending him flying into the brook. And suddenly, as she runs away in tears, something about her seems awfully familiar…

Shaking himself dry, Charles chases after Ella and cajoles her into another rendezvous—and this time, he arrives with an invitation to the Palace Ball. 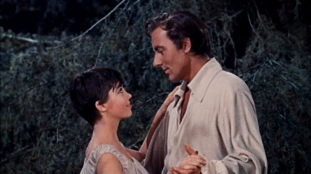 “B-but I don’t know how to dance!” she sputters. The prince gently takes her by the arm and shows her a few steps… and a few more… and soon they’re swirling all over the glen. She glides home in a near-trance, falls into bed and dreams. And because this is Leslie Caron we’re dealing with, her dream features the entire company of Roland Petit’s Ballet de Paris.

But even Ella’s fantasies are tinged with realism. In her memoir, Caron recalls: “Roland’s concept for the ballet was delightfully original. In her dreams, instead of imagining the ballet numbers in the ornate ballroom, which Cinderella, being a simple girl, couldn’t likely visualize, they take place in the depth of the palace kitchens—Cinderella’s world. Pots and pans steam in rhythm, while lovely kitchen maids and scullions brandish wooden spoons and huge ladles. The pas de quatre between the four cooks is a very witty takeoff on the Rose Adagio in the ballet Sleeping Beauty. As for my performance, I was in very good training after many months on the stage, and I think that I did my best classical dancing in this film and in Daddy Long Legs, which was to follow immediately after.”

When Ella awakens from her dream, nothing has changed. Yes, she’s holding tight to her invitation to the ball, and she’s mastered a step or two. But she still has nothing to wear—and everything to fear from her family if she strays from the role of servant. As she bitterly helps them primp and prepare for the evening, she doesn’t merely long to go to the ball; she flat-out envies those who are on their way there.

Once they’ve all swept haughtily out the door, Ella drops off to sleep, only to be awakened by the light-fingered Mrs. Toquet, who’s lifted a gorgeous gown—a pink satin and crystal confection fit for a princess—from the Widow Sonder’s rich cousin Loulou’s house. Her fairy godmother fretfully helps her dress (“The corset was invented by the devil!”), places a pair of glass slippers on her feet, and leads her to a golden carriage with but one warning: she must leave the ball by midnight. It seems the cabbie has another fare he needs to pick up at 1:00.

Fearing that her family will see her in the stolen dress and drag her back to the scullery, Ella all but sneaks through the front door of the palace. Still, she’s set upon by just about every man in the place. As she dances with one after another, too afraid to speak, she’s forever trying to make her way to the kitchen to see Charles, the “cook.” Finally, Ella whirls away from one partner only to see another standing before her: the prince in all his finery.

Thoroughly bewildered and still desperate to avoid her family—and keeping one eye on the clock—Ella breaks away from Charles and flees to her carriage, stepping out of a glass slipper as she makes her escape. But not before creating quite a stir: the whole room’s buzzing about the strange, dark-haired girl in the lovely pink dress, who never uttered a word to her admirers. Is she an exotic royal visitor who doesn’t speak the language?

By the next day, the rumors have jelled into a single narrative: The girl is an Egyptian princess, betrothed to the prince. When the news reaches a heartbroken Ella, who has no idea that she’s the one they’re all gossiping about, she gathers up her pitiful few belongings—including the lone glass slipper, which is all that remains of her dreams—and runs away, no longer able to live in the shadow of the palace she once hoped to call her home.

As she grows weary on the journey, she falls asleep in her meadow, awakening to find Charles holding forth the errant glass slipper in search of its mate. “I have the other!” Ella cries. He fits the slipper onto her foot as the curious villagers, including her hideous family, look on. The prince embraces her tenderly and protectively, and she falls against him with such blessed relief, it’s as if she couldn’t have taken another step.

You get the feeling that after Charles and Ella marry, her anger and wariness may soften, but she’ll never be a serene princess—and he’ll be fine with that. Wilding himself was no slouch when it came to formidable women: he was married to Elizabeth Taylor when he made this film and later spent his happiest years with Margaret Leighton, a fabulous handful if ever there was one. And onscreen, the wryly adorable actor held his own with any number of strong actresses, including Jane Wyman in the criminally underrated Stage Fright. (One exception was the unintentionally hilarious Torch Song, where Joan Crawford mowed him down and left him by the side of the highway like so much leading-man roadkill. More on that, including Joan in blackface, here.)

In The Glass Slipper, Wilding is perfect as the prince on a rescue mission: gentle, romantic, sometimes bemused, but always sure, solid and sympathetic. Caron, who never really got her due as an actress, is just devastating as the girl who hungers to be loved and to belong. And both stars are clearly comfortable with director Charles Walters, who worked with Caron on Gigi and Lili and survived Torch Song alongside Wilding. Together they crafted a fairy tale with a real heart beating beneath its candy-colored surface. 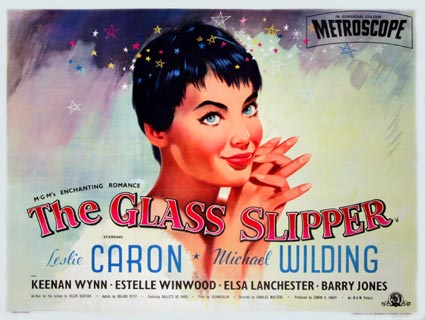