“For anyone anywhere around the world who loves movies, she is more than just an Irish movie star—she is one of the true legends of cinema,” he went on. “A self-described tomboy, she was a pioneer in doing her own stunts in film after film, mastering complex fencing and fighting routines. Our eyes were riveted to her every moment she was on the silver screen.

“She started out in black and white and later became the Queen of Technicolor, leaving us mesmerized not only by her performances, but by her fiery red hair and gorgeous green eyes…” Then, in one of the evening’s most charming moments, Neeson sighed, paused a moment to catch his breath, and murmured, “Oh God… sorry, just got lost thinking about my first crush…”

“For the entire Academy, tonight is the chance to present her with an honor richly deserved. For me, it is a chance to thank her for giving hope to a kid from the town of Ballymena, County Antrim, that maybe one day, we too could end up in motion pictures,” he said, clearing a catch in his throat. “And it’s a chance to say to the woman who has long had a place in my heart, and in the heart of everyone from our Ireland, six thousand miles across the sea, I love you, Maureen. We all do.”

“Well, I guess everyone is in love with Maureen O’Hara,” agreed Eastwood. “She’s the ultimate Irish lass, and I would love to have been the guy who dragged her across the countryside and got her to the church…”

Then, as everyone in Dolby Ballroom, including many current Hollywood notables, rose to applaud, Neeson gently presented O’Hara with her long-overdue Oscar. “What’s this?” she teased. “I only hope it’s silver or gold and not like a spoon out of the kitchen!”

She fought back tears (and we Irish always lose that fight) as she paid tribute to the three movie men who meant the most to her: Charles Laughton, who tapped her for The Hunchback of Notre Dame while she was still a teenager, whom she called “totally responsible for my career”; John Wayne, one of her dearest friends and her co-star in five films; and “that old divil himself, the great John Ford,” who directed her in five movies, including How Green Was My Valley as well as Rio Grande and The Quiet Man with Wayne. Looking heavenward, she cried, “Pappy, we finally got an Oscar!”

“I’m honored beyond words. Thank you with all my heart,” O’Hara said in closing, as she blinked away tears. “I’ll leave you with an old Irish saying. May the road rise to meet you. The wind be always at your back. And, may the sun shine warm upon your face. Good night.” Swept away by another thunderous standing ovation, O’Hara, now wheelchair-bound, rose and bowed to the crowd, with help from the gallant Neeson. (And look at his face, and Eastwood’s, in the pic below. Pure love.) 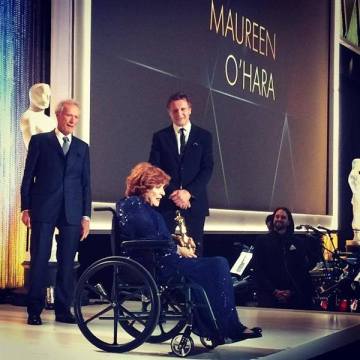 O’Hara became only the second performer to win an Honorary Oscar after never having been nominated for a competitive one; the other was Myrna Loy. (Honestly, Oscar: What is wrong with you?!?)

This was Hollywood’s second chance to honor O’Hara this year; in April, she was embraced so warmly at the TCM Classic Film Festival it’s a wonder we let her go home. Much more on that here. 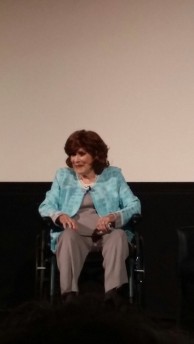 In the months leading up to last night’s ceremony, O’Hara told interviewers she cried when she learned of the award: “It’s just absolutely wonderful… I keep thinking, ‘Oh, this is a league of baloney. They’re not telling me the truth… [It’s like] having a hug, having somebody put their arms around you and say ‘Congratulations’ and say you are wonderful.”

Also honored at the event were actor and activist Harry Belafonte, Japanese animator and filmmaker Hayao Miyazaki and French screenwriter Jean-Claude Carriere.
*
Note to the Academy: Would it kill you to televise the Honorary Oscar ceremony? This year’s recipients alone have amassed almost two centuries of achievement among them, both on and off the screen. Some of us would much rather see them get their awards and listen to them pay tribute to their peers than to see some starlet whose career is ten minutes old flounce up to the stage and tearfully thank her agent and her lawyer.