Happy New Year, my dear friends! And welcome to another edition of TINTYPE TUESDAY!

Need a little help making this year a bit healthier than the last? Sure, you could turn to a personal trainer or a gym coach. But wouldn’t you rather take your inspiration from Gloria Swanson?

Here she is merrily camping it up in her Manhattan apartment when she was 73. Yes, the Glamazon makeup’s a bit much… but good heavens, look at that complexion! To quote a song from the season just passed, you could even say it glows! And she still had the perfect figure for crushed velvet gowns and gold lamé pumps. Which you get the feeling she wore even when the cameras weren’t looking. 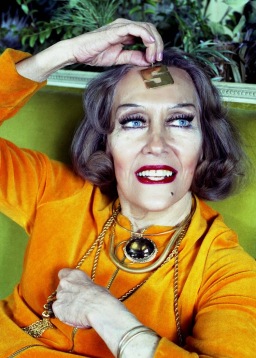 Swanson was decades ahead of the healthy-eating curve. In 1929, after producing the financially disastrous Queen Kelly, she went to her doctor complaining of stomach pains. “I thought I had ulcers because if you are a producer, you are supposed to have ulcers,” she joked. He asked for a quick inventory of what she’d been subjecting her system to—rich, gooey foods, sugary snacks, decadent cocktails—and told her to stop treating her body “like a garbage pail.” A much more obedient patient than most, she immediately swore off meat, poultry, sugar and alcohol and adhered faithfully to a macrobiotic diet.

A true evangelist, Swanson would sometimes confront people on the streets of New York—a much more dangerous move than eating sugar—and chastise them about the junk they were scarfing down at the corner hot dog stand. She even brown-bagged it to glamorous parties, where the buffet tables were groaning with deadly delicacies.

She drank only spring water from France, made her own flour from brown rice and her own sweetener from boiled organic raisins, and frequently fasted. “After one fast I was on for 10 days I swore I’d never eat again,” she said. “I was just going to eat petals of flowers…”

Okay maybe she was a little over the top. 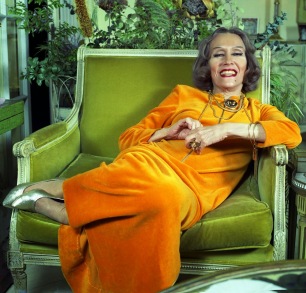 But Swanson was right about sugar—and campaigned against chemicals and pesticides in foods before it was popular. She also created some recipes that didn’t involve making your own flour and sweeteners or eating the daisies—and I’m sure she’d forgive you if the water you use is domestic. Here’s a recipe to get your new year off to a healthy start:

Wash all vegetables thoroughly, preferably with a veggie brush, and then chop them well. Finely mince the garlic. Pour water into a large pot and add everything. Cover and simmer about 40 minutes, or until the celery is tender. Serve immediately, or turn off the heat and allow the broth to cool on the stove, pour into covered containers and refrigerate. Reheat to serve later.

Okay, a confession: I added the garlic to Gloria’s recipe. I am a total garlic hound. When I recently ordered pasta with garlic and oil from the local pizzeria, this was my plaintive cry: “Extra garlic, please. And then if you look at it and say, whoa, that was too much garlic, just add more garlic.” (My husband was away at the time.)

In this recipe, the garlic not only adds much-needed flavor, but tons of nutrition—and packs a wallop against winter cold and flu germs. If you’re not a garlic fan, you can add any herbs (or other vegetables) you like, or perk it up with chili powder, paprika, curry powder or other spices. Take it in any direction you choose!

This is a great way to start a meal or to serve as a little something to tide you over in middle of the afternoon. And if you close your eyes and use a little imagination, it will make you feel like a movie star prepping for a glamorous role, getting ready for your close-up…