TCM Festival Flashback: The Cast and Director of DELIVERANCE

Last year, I covered the TCM Festival for Sister Celluloid (click here for Sunday in New York, Mary Poppins and Margaret O’Brien, here for Eddie Muller’s fabulous interview with William Friedkin, here for Kim Novak’s thrilling and moving takedown of online bullies, here for Shirley Jones’ awesome introduction of Oklahoma! and here for Maureen O’Hara bringing the house down with How Green Was My Valley).

But in 2011 and 2013, I attended strictly as a fan. In the weeks leading up to this year’s TCM Festival on March 26-29, I’ll be sharing some of the events of those first two trips. Please forgive the less-than-stellar photography; I only had my little Brownie at the time!

April 26, 2013: The Director and Cast Introduce Deliverance at the Grauman’s Multiplex:

This screening—with Jon Voight, Burt Reynolds, Ned Beatty and director John Boorman—was so much fun it was all I could do not to leap from my seat as they left the stage and say, “Wait up, guys! I don’t care where you’re going, just take me along!”

But even before they settled into their seats, there was a whole lotta guy-hugging going on. These boys are clearly still pretty crazy about each other, more than 40 years on. I choked up seeing Reynolds so very frail, walking haltingly with the aid of a cane. But once he started talking, the years fell away from him completely. 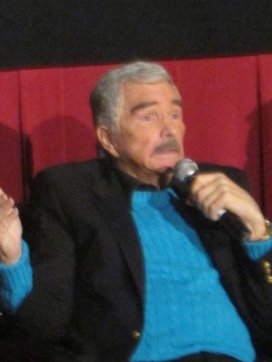 He vividly remembered the scene where his character, Lewis, goes over the falls, which was originally shot with a dummy because no stunt man was crazy enough to do it. And the resulting footage looked, well, like a dummy going over the falls. So Reynolds, a cocky ex-footballer who was in insanely good shape, volunteered to do the stunt himself. “Now I’ve got it all planned out in my head,” he recalled. “I’ll go over the side, hit this rock, and then go here and land there.” 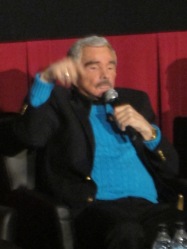 But several tons of rushing water has a mind of its own: “So what happened was, I went over, got knocked the hell all over the place, and then got slammed down to the bottom of the falls. My clothes were torn off, I broke my tailbone and punctured my chest. I went over the falls a pretty fit young guy and hit bottom a nude 90-year-old man.” 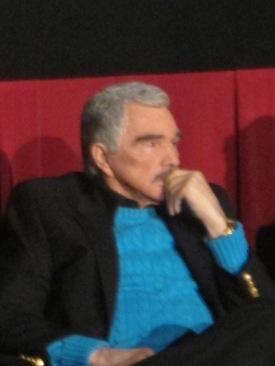 Yikes! But at least they got great footage, right? Reynolds turned to Boorman, who’d been pretty quiet, and asked, mock-angrily, “Do you remember what you said when I asked you how it looked?” And the director, almost talking into his shirt, smiled and replied, “I said it looked like a dummy.” And along with the audience, Voight just lost it.

Inevitably, Beatty was asked about his, um, big scene. What did he think when he read the script? “Well, I’m an AC-TOR. I ACT. That’s what I do. So I simply looked at it as another acting challenge.” Do you believe that? Reynolds didn’t…

Even though he wasn’t the victim, Voight wasn’t so sanguine about that scene, or about the rawness of the film in general: “When I read the script, that part really struck me. There seemed to be so much violence, I was really hesitant. But my girlfriend read it and said, ‘Are you crazy? This is a great story!'” He said despite the rough conditions and a story that could be tough to take, Deliverance turned out to be one of the best shoots of his life.

Reynolds agreed. “I’ve made about 70 movies in my life,” he said. “But only one real film. And that’s this one. After they told me I’d been cast, I started walking along the street outside the studio literally yelling, ‘I got the part! I got the part!’ Like something out of an old movie!” If ever there was a crowd that could appreciate that, it was this one…